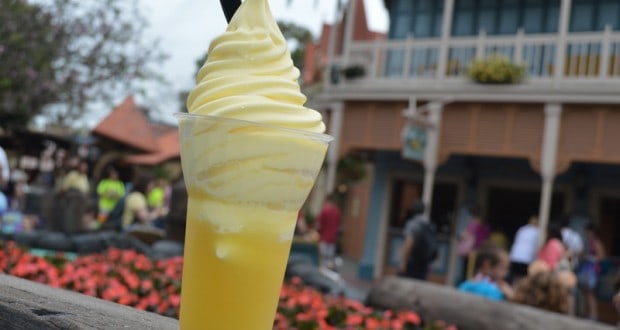 by Brittany DiCologero
10. Dole whip
I know what you’re thinking—why would any self-respecting Disney fan place Dole whips in the last spot on this list? Well, my reasoning for that is that I can get Dole whips at home, my local ice cream shop sells them so for me, they’re no longer a Disney-specific snack. That being said, they’re still one of my favorite snacks, and there is definitely still something special about having one in Adventureland or at the Polynesian during a Disney vacation.

Main Street popcorn, whether it be the pre-packaged kettle corn style popcorn you can get at merchandise locations, or the popcorn being popped in the parks, popcorn is definitely one of my favorite snacks at Disney. Even though they sell popcorn all over the resort, Main Street has always been my favorite place to get it. I don’t know if it’s because the smell is just so strong over there that I feel like I just have to have it, or if it’s just a nostalgic tradition for me, but I always enjoy getting popcorn on Main Street.

I love funnel cake—literally any opportunity I have to buy funnel cake, I will do so. And as a self-proclaimed funnel cake expert, I can officially say that Disney is home to some of the best funnel cake. My favorite place to get funnel cake in Disney is outside of the Indiana Jones Epic Stunt Spectacular at the Oasis Canteen. I’m not quite sure of my reasoning for this, it might be the nostalgia factor like the popcorn, but for whatever reason just trust me that this is the best location for funnel cake at Walt Disney World.

I have a sort of love/hate relationship with turkey legs, but I always still manage to have at least some of a turkey leg during each trip. They’re one of those weird snacks where I really do feel the need to have one, but I never really want to buy one myself. They’re good for a couple of bites, but they’re just way too much food and I can’t justify eating all that. Just know however, that if you go to Disney with me, this means I won’t be ordering my own turkey leg, but I’ll gladly take a bite or two of yours.

When I came home from the college program and people asked me what little things I missed about being able to go to Disney all the time, I would be lying if I didn’t mention Joffrey’s donuts. You know those little coffee kiosks in all of the parks? Well their donuts are heavenly. For some reason I never really tried them before I lived close to the parks during my college program, but now those donuts are seriously one of the things I miss the most after coming home.

Le Fou’s Brew can be a very divisive topic among Disney fans, however I really like the taste and idea of this item, and think it’s a nice fit for the theming of Gaston’s Tavern in what is essentially a dry park. I haven’t tried Le Fou’s Brew’s competitor (Butter Beer over at Universal) but so far Le Fou’s Brew is a hit in my book, and something that I find nice and refreshing on a hot day in the Magic Kingdom.

If you like strawberry shortcake, you need to stop what you’re doing right now, book a flight to Orlando and run to Sunshine Seasons in Epcot for some cake. The pastry counter here is one of the most overlooked parts of the Land pavilion, but it really does include some of the best desserts at Walt Disney World.

My other favorite Epcot dessert comes to us from Epcot as well. Next time you’re looking for something sweet in World Showcase, head over to the bakery in Norway and order a troll horn. This puff pastry filled with sweet cream is shaped like a horn and coated in sugar and makes for the perfect World Showcase snack. It’s flaky, and not overly filling for this kind of snack (like one of those giant donuts from Joffrey’s might be) but it definitely fulfills the urge your sweet tooth might be giving you.

Churros are my go-to Fantasmic or Festival of Fantasy watching snack. Churros are just so quintessentially Disney, and they really do make the perfect snack to pick on during a show. I love dipping them in chocolate sauce, and also generally make sure to have some churritos from Mexico in Epcot at least once per trip as well.

This was one of the more difficult lists to make, and pretzels might seem surprising for the number one pick, but Disney seriously has some of the best pretzels I’ve ever had. The cream cheese pretzel is my favorite Disney pretzel, but I’m not at all opposed to the plain Mickey pretzels or the Jalapeño stuffed pretzel. Another excellent pretzel can be found in Germany in Epcot.

2015-06-27
Brittany DiCologero
Previous: Top 7 Hidden Gems At Disney’s Animal Kingdom
Next: So You’ve Decided To Go To Walt Disney World – 8 Things You Should Do Next