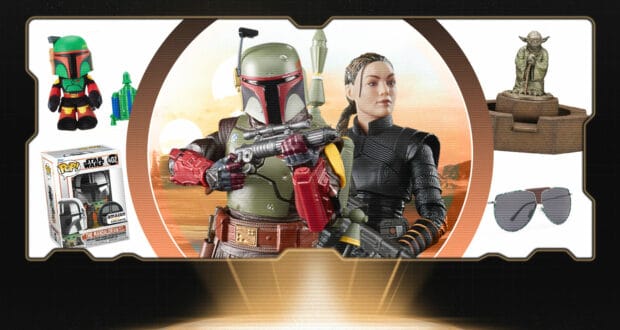 There is so much more to ‘Star Wars’ than just a series of movies and a few television shows. ‘Star Wars’ collectibles have been popular for over 40 years.

Each Tuesday through the end of December StarWars.com, the official ‘Star Wars’ website, is sharing new collectibles from Bring Home the Bounty. Here is the latest roundup:

This week, Bring Home the Bounty features new Boba Fett and Fennec Shand Black Series figures based on the highly-anticipated The Book of Boba Fett, and much more!

The hunt is on at BringHomeTheBounty.com, with the latest products inspired by The Book of Boba Fett and more, including new apparel, accessories, and collectibles from Funko, Hasbro, and others. Many new items are on sale or available for pre-order starting tomorrow at 10 a.m. PT / 1 p.m. ET across top retailers globally, including shopDisney.com. Check out a few of our favorites below!

The secret weapon of any bounty hunter: a cool fashion sense. Bring some of Boba Fett’s style to your look with these sharp sunglasses.

Mando and Grogu Pop!s by Funko

Celebrate The Mandalorian with new Funko Pop! bobbleheads depicting Grogu and our favorite clan of two. Available exclusively at Amazon.

Rule the action-figure galaxy with respect. Inspired by the upcoming The Book of Boba Fett series on Disney+, Boba Fett and Fennec Shand are immortalized in the highly-detailed, 6-inch scale Star Wars: The Black Series.

Kotobukiya honors 50 years of the house that Skywalker built with a collectible based on the stunning Yoda fountain, a landmark that greets visitors at Lucasfilm HQ in San Francisco. Love it, we do.

The legend gets adorable with Mattel’s new plush, depicting the bounty hunter as he appears in The Book of Boba Fett.

Visit BringHomeTheBounty.com every Tuesday through December 28 to see the latest and greatest products inspired by the Star Wars galaxy and join the conversation on social media using #BringHomeTheBounty and #StarWars.