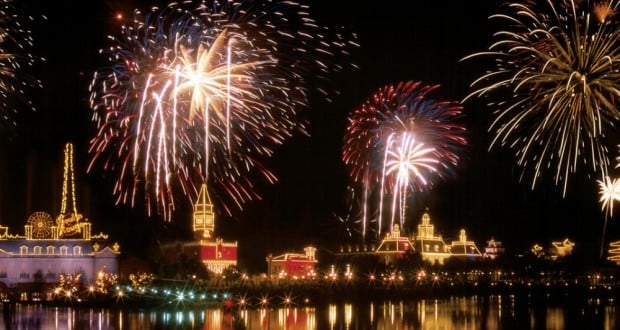 The most important tip I have for Illuminations is to get there early. I generally do not recommend camping out early for fireworks, because they take place in the sky so wherever you’re standing should be a decent view. For Illuminations however, I highly recommend getting a spot early, because the globe that comes out on the water is such a huge part of the show, and if you’re not standing in a spot towards the front you won’t have a good view of it. Even though it is a fireworks show, there is a lot of Illuminations that takes place on the water as opposed to in the sky, so to make sure you’ll be able to see the entire show I’d recommend getting a spot early.

There are so many places to get snacks around World Showcase. Just pick a country you like and grab a snack for during (or before if you’re camping out) Illuminations. I usually get a cronut from the refreshment port, or the Grey Goose slush from France, but you have plenty of options in World Showcase. If you’re like me and usually eat an early lunch on the day you do Epcot, you’ll probably be hungry by the time Illuminations starts anyway.

3. Don’t focus on taking photos (unless you’re seeing it more than once)

I have no problem with taking a couple of photos during the fireworks, but from my experience the more you focus on taking photos, the less you’ll get out of the show. Unless you live nearby and see Illuminations all the time, or are seriously into photography and taking pictures is one of the more important parts of your trip, I’d recommend not going too crazy with the camera. It’s just harder to focus on the show you’re seeing in person when you’re constantly looking through the camera.

Illuminations tells more of a story than most fireworks do, so it’s definitely worth paying close attention to get as much out of this experience as possible. Pay attention to the lyrics, and the design of the space, how the globe is in the center, with all the other countries lighting up around it according to the music.

It always confuses me when so many people leave fireworks shows early. I can understand the desire to beat the crowd out of the park, but it’s not worth leaving early if you’ve already seen most of the show. As I’m sure you know, the best part of any fireworks show is the finale, so I can’t imagine leaving before the finale starts.

6. Don’t leave with the crowd either

The post-fireworks crowd is something that I like to refer to as a cattle herd, and I prefer not to leave with the herd. I’m not saying you should stay at the parks all night, and keep cast members there later than they’re scheduled, but just take your time getting out of the park. If you’re watching Illuminations by Morocco for instance, give it five or ten minutes after the show ends to begin walking out. When you do start heading out take your time. Use the extra time to take pictures, or browse through the shops that will still be open. If you’re not interested in spending your time waiting for a bus or monorail right away, wander through Mouse Gear, Camera Center, or Gateway Gifts, all of which are open a couple of hours after the park closes so that guests on their way out can shop.