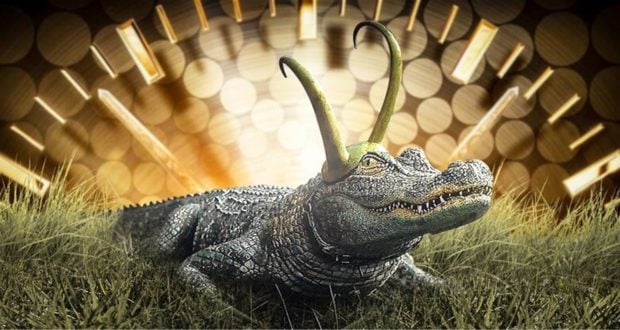 Tom Hiddleston Says He Was Upstaged By Alligator Loki

As Loki wrapped after six weeks, fans look back and everyone seems to be in agreement that Alligator Loki was…. amazing.

Alligator Loki didn’t have a long run as it was introduced in episode five of six.  Alligator Loki showed as part of a team of variant Lokis struggling to survive in the Void, Alligator Loki is Loki, but as an alligator. Right now we don’t know if this is a human Loki who’s somehow turned himself into an alligator or whether he comes from some kind of alligator-populated alt-universe, but what we do know is that he’s a badass. When the chips were down and a sinister President Loki appeared, Alligator Loki sprang into action and chomped his hand clean off. Loki star Tom Hiddleston was asked recently who the superior Loki was and he explained why Alligator Loki is the clear answer:

“Two questions, I see there. OK, well, you know, what can I say? I’ve been toiling away at this character going on for 11 years. And I have given everything I can only to be upstaged, perhaps inevitably, by the one true Loki, the superior Loki, which is Alligator Loki. You know I sort of knew it was coming. I felt I was going to be substituted at some point. And I’m glad it’s finally happened. Alligator Loki has arrived. And, yeah, thrown his hat down. And the rest of us simply have to get out of the way at this point.”

We don’t know what the fate of Alligator Loki will be as he stayed behind at the end of episode 5 but we do know Marvel would be silly not to bring Alligator Loki back.

Were you a fan of Alligator Loki?