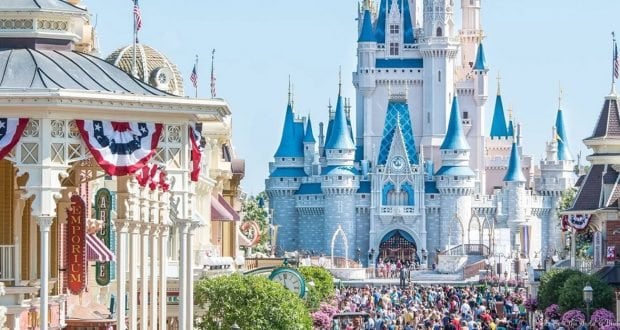 We’ve been to Walt Disney World dozens of times without children, and we can confirm that WDW is not, in fact, just for kids!  There are plenty of experiences and rides for little ones, to be sure – but there are also just as many attractions that adults love, and some that would likely not be appreciated by kids.  For an adults-only Disney vacation, try some spa time, splurge on a once-in-a-lifetime custom-designed meal at Victoria and Albert’s, or check out the nightlife at Disney Springs.  Or take the opportunity to let your inner kid out and enjoy some activities you can’t elsewhere – like trick-or-treating, at Mickey’s Not-So-Scary Halloween Party.  After all, in Walt Disney World, everyone is considered a kid.  (Growing up is over-rated, in our opinion!)

You’ve probably heard people insist that one of the singing busts in Haunted Mansion was modelled after Walt Disney.  We can say with certainty that this is not true!  The bust in question was actually made to resemble Thurl Ravenscroft, a legendary voice actor and the bass voice in “Grim Grinning Ghosts”.

Another persistent lie about Walt Disney is that his body was frozen, and is now kept somewhere on Disney property.  While we love the idea of Walt someday being brought back to life by future scientists, this just isn’t true.  Walt was cremated, and you can find his burial site in California.

8. WDW Gets Boring After Once or Twice

We’re pretty sure that even if we lived in Walt Disney World, it would never get boring – there are always exciting new changes and additions to the parks.  There’s certainly way too much to possibly experience in one vacation, or two, or twenty!  Anyone who is bored with rides and attractions at the parks can explore the many special ticketed events and backstage tours offered by Disney; or you can resort-hop, and try out a variety of fun activities there (from horse-back riding to archery to boating and beyond!).  We always find new and exciting reasons to return to WDW.

7. Johnny Depp Shows Up in Pirates of the Caribbean

Guests who ride Pirates of the Caribbean in the hopes of seeing Johnny Depp in the flesh will be sadly disappointed!  The actor did surprise guests in the Disneyland Pirates ride once, in California, as a publicity stunt for Pirates of the Caribbean: Dead Men Tell No Tales – but this was a one-time occurrence (and it has never happened in the Orlando attraction).

One of the lies told by adults about Walt Disney World is that there aren’t any thrill rides in the parks.  And while it’s true that there are a lot of family-friendly rides on property, there are definitely also many truly terrifying thrill rides.  If you find a friend perpetrating this lie about Disney, invite them to join you on Tower of Terror, Rock ‘n Roller Coaster starring Aerosmith, or Expedition Everest – and see how quickly they change their tune!

5. Perks for Friends of Cast Members

We’ve heard people say that because they know a Disney cast member, they can get into the parks for free; in fact, cast members are frequently asked about this by people they barely know.  So, if you’re one of those people, be aware that the perks to which Disney cast members are entitled typically only extend to immediate family members.  So, if a friend of a friend happens to work at WDW, you will not be able to enjoy the parks for free – as amazing as that would be!

This lie does have a kernel of truth to it.  There’s no secret underground city below Magic Kingdom, but there is a system of underground tunnels called “Utilidors” where cast members carry out important park functions (trash removal, food deliveries, etc.) out of sight of guests.  This makes the “show” area above seem even more magical!  There are backstage tours available where you can visit these Utilidors yourself.

3. Food is Boring and Sub-Par

We find this lie about Walt Disney World upsetting, and we can only assume people spreading it have never been to WDW!  There are many world-class (and even award-winning) restaurants throughout the parks, resorts and at Disney Springs.  And while there are food options for children and those looking for familiar items, there are just as many choices for foodies and those who want to try something new and exciting.  There are global dining experiences available at Sanaa, Yak and Yeti, and every single pavilion at Epcot, for starters!  For many people, experimenting with WDW’s wondrous dining options is a highlight of a Disney vacation.

2. Cinderella Castle Can Be Taken Apart and Reassembled

One of the lies we hear frequently about WDW is that Cinderella Castle was designed to be dismantled, and then put back together, anytime there’s a hurricane warning.  This is emphatically untrue!  However, Imagineers did build Cinderella’s Castle (and other Disney icons, like the Tree of Life) to withstand hurricanes, knowing that Florida can experience some nasty weather.

It is absolutely possible to spend tens of thousands of dollars on a Walt Disney World vacation.  However, it’s also possible – and far more common! – to do WDW on a shoestring budget.  There’s a wide array of resorts and pricing options available, and if you plan ahead and are smart about when and how you book, you can save a ton of money.  Park tickets become cheaper and cheaper the longer you stay, and Disney does have discounts at certain times of the year; plus, everything is included in your vacation cost except food (unless you’ve done a meal plan), souvenirs and any extra experiences you’ve opted for.  So while any vacation costs money, WDW can be done for much less than other vacations.