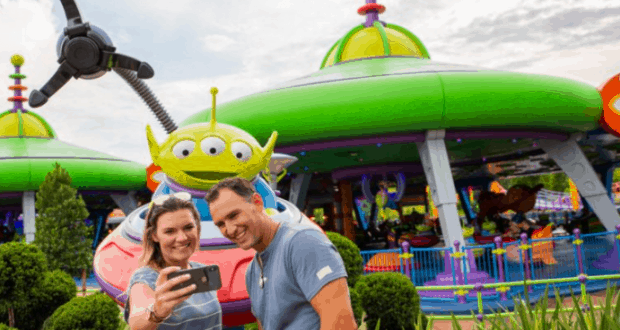 Toy Story Land at Disney’s Hollywood Studios within Walt Disney World has reached a major milestone!  The immersive, themed land opened 1 year ago, marking an exciting anniversary for Disney and all of the cast members that work there.  To celebrate this amazing anniversary, plus the debut of Disney and Pixar’s new movie in theaters, Toy Story 4, Tom Hanks and Tim Allen were recently inside Toy Story Land and chatted about the Toy Story films and how it all comes to live at the park.

Check out this great video below from Disney Parks Blog:

Along with Tom and Tim, other stars of the film including Annie Potts, Keanu Reeves, Christina Hendricks and Tony Hale visited Toy Story Land and also made a special appearance at the Disney Parks Blog fan event.  We previously shared some of the photos and fun from that event.

When visiting Toy Story Land guests get to “shrink” to the size of a toy and experience what it would be like to be a toy inside Andy’s backyard.  There are character meet and greets, themed merchandise and food options, and fun attractions like Toy Story Mania, Slinky Dog Dash and Alien Swirling Saucers.  It is a ton of fun for guests of all ages!

Toy Story 4 is already in theaters, too!  Who has been fortunate enough to see it already?

We wish a huge “Happy Anniversary” to all of the Disney cast members who created and support Toy Story Land!