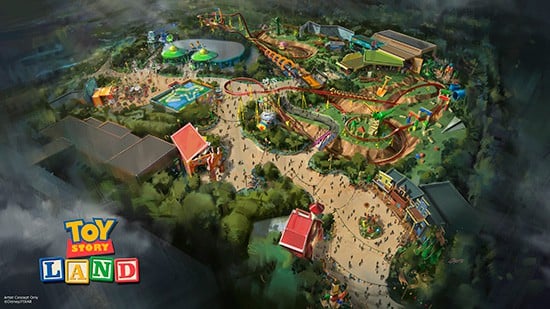 Toy Story Land Could Possibly Open in July in 2018

We heard from the Chip & Co. site that Toy Story Land could possibly be opening in July in 2018.  Toy Story Land is a much anticipated expansion at Disney’s Hollywood Studios in Walt Disney World.  This expansion would turn a multi-acre area within the park into a total immersive Toy Story experience.  This new land is supposed to be the setting for Andy’s backyard and the guests get to become toys in the experience.  It sounds like a lot of fun, and will also bring two new ride to the area that will be family-friendly rides.

Based on the report from Chip and Co., they found a reference to Slinky Dog Dash, the themed family coaster planned for the land, opening on July 1st, 2018.  If this is true, we are only a year away from seeing this new land ready to greet guests!

We know that there has been a lot of construction going on in the area and that the development crews have been making progress.  With various attractions and locations closing around Disney’s Hollywood Studios, the opening of the new land will be a huge deal and much needed.  If the turnout is anything like the turnout for the opening of Pandora – The World of Avatar, we can expect Disney’s Hollywood Studios to be jam packed next year.

What would you all think of a July opening date in 2018?  Who plans to be there?