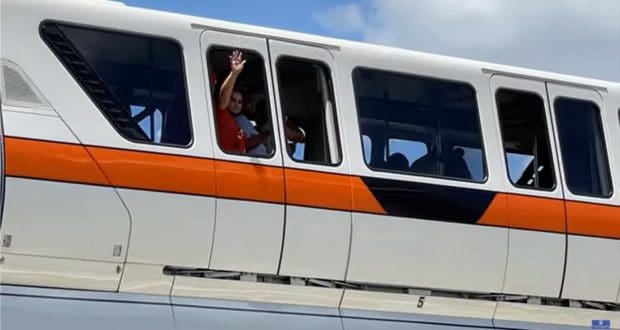 VIDEO of Disney Monorail Losing Power With Guests Onboard

Yesterday was an interesting day for Disney fans out there! Not only did Disney announce a new face mask policy update, but they also introduced the Disney Genie and paid “Lightning Lane” replacing the former complimentary FastPass program at Walt Disney World and MaxPass program at Disneyland. Both news reports left Guests with mixed opinions. But, at least you hopefully weren’t one of the Disney Guests stranded on the orange Monorail!

A video from a Disney fan out of Walt Disney World was shared yesterday, August 18, showing the Monorail Orange lost power. The YouTuber looks to be standing just outside of Disney’s Contemporary Resort where the monorail was stranded. It looks like the Monorail was full of Guests heading to Magic Kingdom Park. The stayed in place long enough that you can hear the Monorail driver inform guests on how to remove the monorail windows for some fresh air. Check out the full video and details below as shared by a YouTuber that captured the scene.

As shared by TheCapsTV via YouTube: “On Wednesday, August 18, 2021, around 1:15 p.m. monorail orange lost power exiting the Contemporary Resort on its way to Magic Kingdom. Disney’s Reedy Creek Fire Department was on scene and in charge within minutes. The monorail tow quickly arrived and was able to tow the monorail into the Magic Kingdom station after several minutes.” Check out the full video below:

Personally, we’d be pulling out our phones and videoing the experience. But for many, this is one of those worst nightmare moments of feeling trapped with nowhere to go. We’re thankful the first responders were able to assist quickly, as Disney’s firefighters have recently been in the news as a COVID outbreak as developed in the Fire Department that services the Walt Disney World area. The monorail breaking down or losing power happens, on the rare occasion, unfortunately. We’re thankful it looks like no one was harmed.