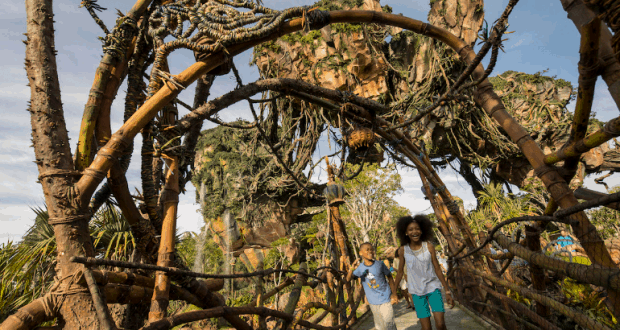 Pandora – The World of Avatar officially opened to guests on May 27th at Disney’s Animal Kingdom in Walt Disney World.  The opening of this new, immersive land made history for Disney’s Animal Kingdom as the largest themed opening since the park first opened in 1998.  This new opening saw some of the highest attendance for the park with Disney creating additional bus loops to accommodate all of the traffic.  Disney even had cast members park at other locations around Walt Disney World in order to free up the cast parking lot to accommodate the influx of guests.  The land was closed to capacity throughout the day with Disney cast members managing the entrance to the land to ensure that it didn’t get over capacity.  The two new attractions saw 4 hour wait times throughout the day, too.

The opening of this new land introduced a lot of great new Avatar themed experiences.  There are two new attractions.  Guests are able to sail down the mystical river to encounter a Na’vi shaman at Na’vi River Journey, or get the opportunity to soar over Pandora on the back of a mountain banshee at Avatar Flight of Passage. There are also various other interactive experiences in the land.  Some of these experiences include shopping for a banshee to take home, using the Na’vi translator to learn the Na’vi language, helping conservation efforts by using a new app that teaches guests in the land about conservation, bio-luminescent plants in when the sun goes down and so much more.  It is amazing the level of detail that Disney put into this new land. How many of you have visited Pandora?  What do you think so far?