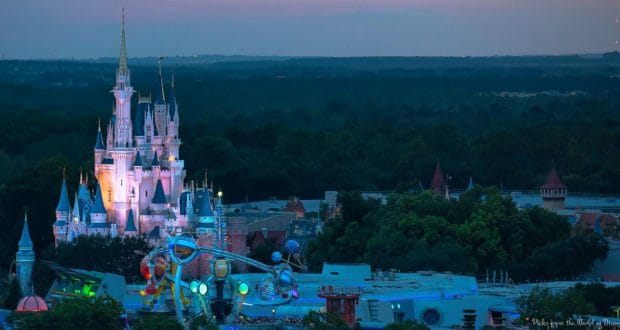 The most important date in all of Walt Disney World’s history is certainly October 1, 1971 when the vacation destination officially opened to guests. On this special date, Disney’s Contemporary Resort and Disney’s Polynesian Village Resort opened for guests to stay at and the Magic Kingdom opened its gates for the very first time. Those who were lucky enough to visit on opening day in the Magic Kingdom got to experience classic attractions such as Walt Disney’s Enchanted Tiki Room, It’s A Small World, and Dumbo the Flying Elephant.

October 1, is also an important day in the history of a second park in Walt Disney World. In October 1982, Epcot first opened to guests bringing the amazing Future World and World Showcase to life for those who were fortunate enough to be there for the special occasion. Opening day in Epcot featured classic experiences such as Journey Into Imagination, The Living Seas, and the World of Motion. While Epcot is undergoing many changes leading up to a big anniversary, opening day was sure to be incredible!

The next Disney Park to open came in May of 1989 after a seven year hiatus of no new large additions to the property. Disney’s Hollywood Studios opened its gates for the first time as Disney-MGM Studios and welcomed guests to step into Hollywood and become stars in their own experiences. With the Earffel Tower as its icon, the park was home to opening day experiences including the Great Movie Ride, and the Studio Backlot Tour, Disney’s Hollywood Studios was just as popular on that date as it is with guests today!

The final Disney Park in Walt Disney World was appropriately added on Earth Day in 1998. Disney’s Animal Kingdom officially opened for guests and welcomed them into a park that celebrated conservation and preservation and aimed at educating guests through fun experiences. Opening day at the park featured many popular attractions that still exist today including Festival of the Lion King, Kilimanjaro Safaris, and It’s Tough to Be a Bug. While many familiar attractions existed then, Disney’s Animal Kingdom has also experienced much growth over the years.

After successfully adding three theme parks to Walt Disney World, 1989 was a monumental year as it also saw the official addition of the property’s second water park. Typhoon Lagoon officially opened to the public on June 1, 1989 and welcomed guests into a tropical location that was disheveled from a massive tropical storm leaving all sorts of fun in its wake. There were plenty of opening day attractions at Typhoon Lagoon to cool guests off including the still popular wave pool where guests can tackle some big waves.

After the success of Typhoon Lagoon, a second water park was set to be added to Walt Disney World and it officially opened on April 1, 1995. Blizzard Beach features the backstory of a freak snowstorm that came through central Florida and was constructed by crafty people who wanted to build a ski resort. When the sun came back and the snow started to melt, the park turned into an even more fun location with water slides, lots of places to cool off, and the popular Summit Plummet.

After opening in 1971, the Magic Kingdom saw changes over the years in the addition of new attractions and experiences, however 2012 saw the first addition of an entire land. New Fantasyland officially opened to guests on December 6 of that year and welcomed them to experience the popular Enchanted Tales with Belle, Be Our Guest Restaurant, and Under the Sea –Journey of the Little Mermaid. Guests could also explore Belle’s village from Beauty and the Beast and the newly added Storybook Circus as well.

Disney’s Animal Kingdom also experienced a major addition that required the removal and moving of several previously existing attractions. Camp Minnie Mickey closed to guests in order to welcome the amazing Pandora – World of Avatar which opened on May 27th, 2017. The land brings guests to the Valley of Mo’ara where they can explore exotic landscapes and plant life under majestic floating mountains. The area is also home to the very popular Na’vi River Journey and Avatar Flight of Passage.

Of all the Disney Parks, Disney’s Hollywood Studios has seen the most change in recent years, particularly with the addition of a new land on June 30, 2018. Toy Story Land magically shrinks guests down to the size of beloved toys like Woody, Jessie, and Buzz and brings them into Andy’s backyard for lots of fun. The already popular Toy Story Mania was reconfigured and Slinky Dog Dash and Alien Swirling Saucers were added, making the land extremely popular with guests.

While the addition of Toy Story Land was monumental for Disney’s Hollywood Studios, it is the newest addition that opened on August 29, 2019 is a game changer for the park. Star Wars: Galaxy’s Edge welcomes guests to the planet of Batuu where they can experience a land filled with experiences from the films like never before. The first of the two attractions, Millennium Falcon: Smugglers Run, is opened on August 29. The second attraction, Star Wars: Rise of the Resistance, opened on December 5th.

Truly a sad day for any Disney fan. Walt Disney World closed it’s doors on Monday, March 16. As the spread of COVID-19 reached pandemic proportion around the globe, gathering together in crowds was too dangerous for the parks and resorts to remain open.