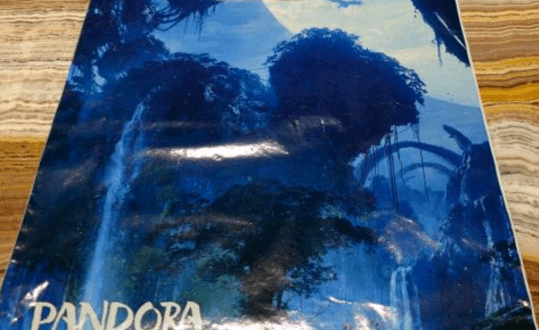 Disney has pulled out all of the stops to create one of their most immersive ventures yet with Pandora – The World of Avatar.  This new themed land is opening at Disney’s Animal Kingdom this month and we can’t wait for the grand opening.  We have now learned that the new land will feature its own shopping bag.  This is definitely new for Walt Disney World since almost every Disney operated location at Walt Disney World uses the same shopping bags.  Pandora – The World of Avatar has its own bag, which features elements of the mystical land.  This bag will be given with shopping purchases made in the land.

We have reported previously on details for Pandora – The World of Avatar including overview of the attractions, menus, shopping experiences and more.  This entire land is getting a lot of buzz and Disney’s Animal Kingdom is expected to be extremely busy for the coming months.  We aren’t sure yet if we will see some of the much anticipated merchandise sell out due to the popularity.  FastPass+ selections are expected to stay booked up, so you will have to watch closely on the app for those if you will be in the area.

Who will be going this month to see Pandora?  What do you all think so far from what has been released?