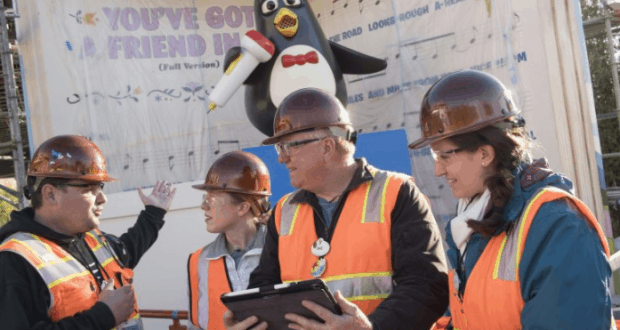 It is always a great day when we get updates about Toy Story Land!  As we previously reported, this immersive land is set to open on June 30th, 2018 at Disney’s Hollywood Studios in Walt Disney World.  Disney Parks Blog announced today that Wheezy, the adorable toy penguin from the Toy Story movies has made his appearance within the land.  He joins some of the other Toy Story friends that have already made their debuts like Jessie, Rex and Slinky Dog.

Guests that visit this new land will be “shrunk” to the size of Andy’s toys so that they can check out the fun that is going on in Andy’s backyard.  There will also be two new attractions, Slinky Dog Dash and Alien Swirling Saucers.  Toy Story Mania will still be at the land with a new entrance to fit in with the story for the new land. Toy Story Mania has also been expanded with a third track so that more guests can play at a time.

If you want to dine while at the new land, Woody’s Lunch Box will be serving guests with a variety of quick service options and old-fashioned soda floats.

We can’t wait for the new land to open and to see all of the amazing details and elements that Disney has worked into the land.  How many of you will be visiting Toy Story Land when it opens?