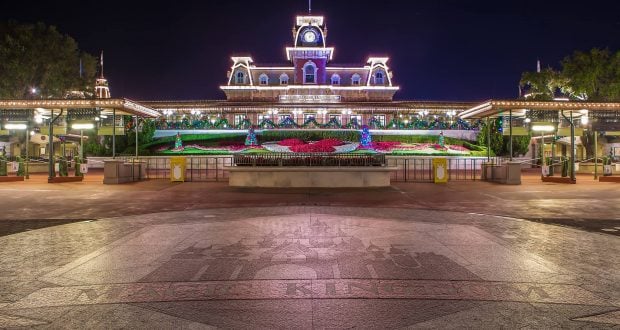 The most popular of the four Walt Disney World theme parks is by far the Magic Kingdom. Bringing guests into a realm of fantasy and fun, the park is a quintessential Disney experience on any vacation. Guests who spend time in the Magic Kingdom can experience everything from sailing the seas with pirates, blasting off into space, interacting with ghosts, and flying high in the skies over London. With so many amazing experiences to have in the park, guests often do not get to see them all simply because they don’t have enough time. Guests should figure out ahead of time which experiences are must dos before getting to the park to make sure that they don’t miss out on some of the most amazing attractions and shows. Guests truly haven’t done the Magic Kingdom unless they’ve done these seven things.

The Magic Kingdom is home to plenty of attractions that are fun for the entire family as well as some that are truly thrilling. The park is home to a mountain range consisting of four attractions which will have guests grinning from ear to ear and wanting to ride time and time again. Splash Mountain in Frontierland brings guests on a journey alongside Br’er Rabbit who is searching for more adventure. Along the way, Br’er Fox and Br’er Bear continually try and capture Br’er Rabbit, ultimately sending him and guests down a slippery hill into the Briar Patch below. Next door to Splash Mountain is Big Thunder Mountain Railroad on which guests board a runaway mine train for the wildest ride in the wilderness.

Guests who are brave enough to board the mine trains soon find themselves careening around the mountain and through caves on a thrilling adventure that can’t be missed. New Fantasyland is home to the Seven Dwarfs Mine Train which offers guests the chance to hop aboard a different mine train and explore the beautiful mine where the seven dwarfs work. After a tour of the glittering mine, guests travel around the entire mountain and even catch a glimpse of Snow White and the Evil Queen disguised as a witch. The final mountain in the Magic Kingdom is Space Mountain in Tomorrowland where guests can enter into Starport 75 and blast off into the galaxy on an out of this world adventure. Guests who are visiting the Magic Kingdom should definitely experience the thrill of conquering all four of the mountains!

No visit to the Magic Kingdom is complete without a stop to meet the mouse himself. Mickey can be spotted in several places throughout Walt Disney World, but one of the best spots to meet him one on one is at the Town Square Theater on Main Street. Mickey is dressed in his Magician outfit here. This is a perfect time to snap some pictures and get autographs!

One of the most classic attractions in all of Walt Disney World is the Haunted Mansion in Liberty Square. Guests who are brave enough to enter into Gracey Manor suddenly find themselves on a grand tour conducted by the disembodied Ghost Host. Along the way eerie effects and scenes come to life as nine hundred and ninety nine happy haunts come out to socialize. The classic attraction concludes with a hitchhiking ghost interacting with guests and deciding to follow them home! No guest should visit the Magic Kingdom and not experience the Haunted Mansion.

4. Pirates of the Caribbean –

Another classic Walt Disney World attraction can be found in Adventureland. Pirates of the Caribbean invites guests to board boats and take to the seas for a thrilling adventure alongside pirates. Guests pass through eerie caves full of skeletons and mermaids and soon find themselves in a burning seaside town being ransacked by swashbuckling pirates. Many of the scenes on Pirates of the Caribbean are iconic and guests can also spot Captain Jack Sparrow from the film series several times throughout the attraction.

This classic attraction was originally designed for the 1963 New York World’s Fair and it celebrates the unity of all people around the world. Guests who board the happiest cruise that ever sailed can sing along to the classic song of the same name and move through massive rooms depicting different areas of the world. Each room features the song sung in a native language and guests can listen in French, Swahili, and Japanese making it a truly wonderful celebration of culture. The final scene of It’s A Small World features all of the dolls of the world decked out in white in a beautiful display of unity and celebration.

Located in Fantasyland just across from It’s A Small World is Peter Pan’s Flight based on the classic Disney animated film Peter Pan. The attraction invites guests to board pirate ships and take to the skies with Peter and the Darling children as they soar over London and Neverland. Along the way guests encounter Captain Hook and his band of pirates and face off, ultimately being victorious and sailing off into the sky on an enchanted pirate ship. This attraction is a guest favorite and can absolutely not be missed on a day in the Magic Kingdom.