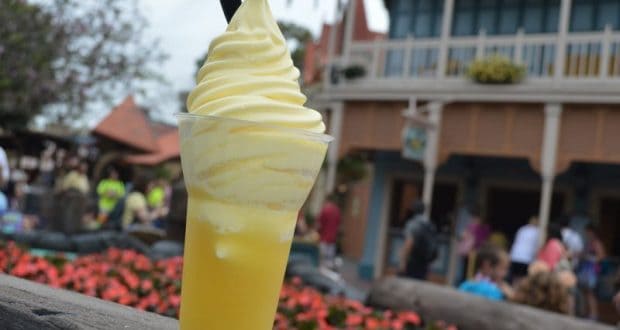 If you’ve ever been to Walt Disney World and had the experience of smelling the freshly popped popcorn from a distance before almost instantly buying some for yourself, then you are well aware of how difficult it is to resist this Disney treat. The smell of popcorn in each of the parks (or my personal weakness—walking into Fantasmic) is enough to draw any Disney fan over to try some of their own. Popcorn is not only served at the various snack carts around the park, but also at the various gift shops in the pre-packaged bags of “Main Street Popcorn,” as well as in specialty varieties at both Animal Kingdom and Animal Kingdom Lodge.

Churros are my go-to parade snack of choice—for whatever reason, I always seem to end up watching the Magic Kingdom parades from Frontierland, meaning I conveniently have to walk by the churro cart. Another favorite place to get churros, or churritos rather is in the Mexico pavilion in Epcot. The pavilion’s quick service restaurant, La Cantina de San Angel is home to some delicious churritos!

Another classic snack, Mickey premium bars are must-haves on a hot day in the parks. This is another snack you might find hard to resist simply because they are sold nearly everywhere, especially in the summer, when the weather is hot and you’re practically begging for ice cream. If you’re not a fan of the chocolate and vanilla flavors of the Mickey premium bar, try the strawberry flavored popsicle that can typically be purchased from the same carts.

In my opinion, funnel cake is one of the most overlooked Disney snacks. Not only is funnel cake delicious in its own right, but there are a couple of locations around the Walt Disney World resort that serve funnel cake with ice cream and fruit toppings. If you don’t believe in counting calories on vacation this is one snack/meal/dessert that you’ll just have to try.

While turkey legs are not necessarily my favorite Disney snack, I do appreciate them simply for their classic history as a Disney snack, and if you’re into eating obscene amounts of turkey while you walk through a theme park this is the perfect snack for you. Turkey legs have even been featured on a number of different merchandise items, proving their ultimate popularity among Disney fans.

Even with the recent end of the beloved cream cheese pretzel, pretzels at Walt Disney World in general are pretty hard to go without. Whether you prefer the classic Mickey shaped pretzel or my favorite, the pretzels found at the beer cart in Epcot’s Germany pavilion, best served with just a little bit of mustard. If you don’t mind splurging on a signature dining experience, you can also have some excellent pretzel bread—best dunked in cheddar cheese soup, at Le Cellier, also in Epcot’s World Showcase.

Do you ever buy a cookie because you saw someone else with it and had this crazy feeling that you needed to go and buy the exact same thing? I swear this never happens to me when I’m at home, but there are some cookies in Walt Disney World that I just can’t go without. Whether I’m walking through the Confectionary on Main Street USA, or browsing a resort gift shop, there are some cookies that when I see them, I just have to have one.

Can you really be a self-proclaimed foodie if you haven’t had a rice krispie treat at Walt Disney World? These addicting, sometimes chocolate and candy covered treats are one of my favorite items to bring home from the parks. The only thing that can almost compare to having one of these treats in the park is enjoying some at home, which is why I almost always stock up on some extras during each trip to the parks.

For many Disney fans, Dole whips are at the top of the list for their favorite snacks in the parks. These delicious ice cream and pineapple treats can be found in the Magic Kingdom’s Adventureland, as well as at the Polynesian Village Resort. Dole whips are a refreshing twist on your basic soft serve ice cream, and I can’t recommend them enough while visiting Adventureland.

Cupcakes can also be found all around the Walt Disney World resorts, everywhere from resort gift shops, to bakeries within the parks. Many guests even embark on cupcake crawls, to have a fun and cupcake filled day of fulfilling any cravings from their sweet tooth. These treats have become a staple in shops, restaurant dessert menus, and most recently at Disney Springs at Sprinkles.