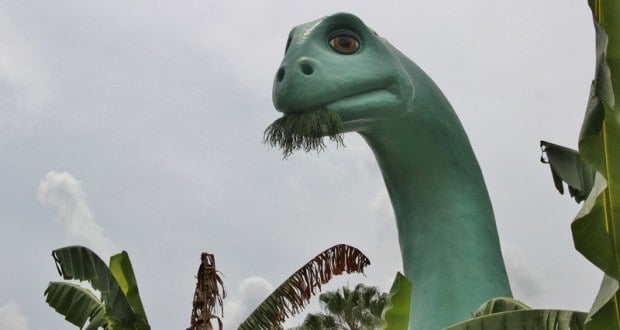 From the chance to enter into fictional universes like Star Wars and The Twilight Zone to the chance to see how Indiana Jones pulls off major action stunts – guests feel like stars, Hollywood Studios is an exciting theme park to visit! One of the things that makes Disney’s Hollywood Studios so amazing is its attention to detail in all areas of the park. With so many things to see and experience, it is no surprise that there are some details which often get overlooked by guests. Here are eight awesome facts about Disney’s Hollywood Studios that guests might not know.

In the Echo Lake area of the park there is a counter service ice cream location located inside a large green dinosaur named Gertie. Gertie has a rich Hollywood history as she was developed and animated by Winsor McCay and would seemingly interact with him as he performed in front of a screen.

The fastest attraction in Walt Disney World is the Rock ‘n’ Roller Coaster Starring Aerosmith which takes guests into the studio with the band where they are recording their next hit. After being invited to a show across downtown, guests soon find themselves strapped into a super stretch limo and launched from zero to sixty in 2.8 seconds!

Muppet Vision 3D is home to seemingly endless sight gags, props, and items scattered throughout the queue, preshow area, and theater. Guests in the preshow area can look in the rafters above for a portrait of a happy looking Muppet. The portrait is actually a representation of the late Jim Henson in Muppet form, honoring his life and legacy.

One of the most popular attractions in Disney’s Hollywood Studios is Toy Story Mania which shrinks guests down to the size of a toy and takes them through a series of interactive midway games hosted by Woody, Buzz, and the gang. In the loading area of the attraction, guests might notice a Little Golden Book titled Tin Toy by Lasseter. Tin Toy was actually a short created by John Lasseter years ago that featured a toy that came to life. The idea for the story eventually evolved into Toy Story, so it is a fitting tribute in Toy Story Mania.

The lobby of The Twilight Zone Tower of Terror is full of amazing details which hint that the Hollywood Tower Hotel was abandoned in a hurry many years before. What many guests don’t realize is that a number of props throughout the lobby are from episodes of the television show. Guests can try and spot a pair of broken glasses from the episode “Time Enough at Last.”

Also found in the lobby of the Hollywood Tower Hotel is a commemorative plaque awarded for excellent service by AAA. Many guests might assume that it is just a random prop, but upon closer inspection the plaque has as sinister undertone. In real life, AAA presents a five diamond rating for excellent hotels, but the Hollywood Tower Hotel received thirteen diamonds which seems rather unlucky.