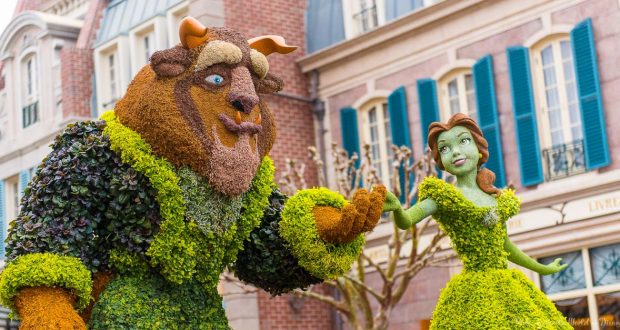 10 Tips And Secrets For Epcot In Walt Disney World

Epcot is one of the most unique theme parks in Walt Disney World in that it has two distinct halves. Future World takes a focus on how nature and technology come together to help shape the world today and the future tomorrow. World Showcase features eleven different countries that allow guests to explore different cultures, styles of architecture, and cuisine and feel as though they have traveled the world. Future World and World Showcase combine to make Epcot an amazing park which guests love to explore. With so much to do and see in the park, there are some great tips and tricks which guests can follow to help save time and stress while exploring. With all of that extra time, guests can really stop and appreciate all of the small details and find some secrets hidden throughout the park. Here are ten tips and secrets for a day exploring Epcot in Walt Disney World.

The three most popular attractions in Epcot are Frozen Ever After, Test Track, and Soarin’. Frozen Ever After is located in the Norway Pavilion and is a family-friendly boat ride that offers beautiful surroundings, top notch animatronics, and of course… the forever popular Frozen characters and songs to sing along with! Test Track Presented by Chevrolet allows guests to step into the design studio and create their own “SIM” car which can then be tested on the track in Responsiveness, Capability, Efficiency, and Power. Soarin’ takes guests on a hang gliding adventure over beautiful sights like the Matterhorn, the Great Wall of China, Iguazu Falls, and Epcot. These attractions are so popular that they can easily have wait times exceeding two hours on busy days in the park. Book a FastPass for one of the three attractions (all on Tier 1) and head to the other two immediately when the park opens, back to back.

A great secret hidden in plain sight in Epcot can be spotted in World Showcase. When standing at just the right angle, guests can look across World Showcase Lagoon and enjoy the skyline and architecture of Morocco across the way. What many guests don’t realize is that the tallest tower in the distance is actually the backside of The Twilight Zone Tower of Terror in nearby Disney’s Hollywood Studios! While building the attraction, Imagineers realized that the structure was so tall that it could be seen in Epcot, so they made sure that similar architecture and paint schemes were used so that it would flawlessly blend into the Moroccan skyline.

While enjoying a serene ride on Living with the Land in The Land Pavilion in Future World, guests gently float along through various types of environments and several massive greenhouses. Much of the food grown in the greenhouses is served in various restaurants around Walt Disney World, and some of it is even used as artwork while growing! As the boat floats between two large tables of growing lettuce, guests should look carefully to see that the lettuce often forms classic Hidden Mickeys and the Epcot logo!

The pavilion located next to Mission:SPACE used to be known as the Wonders of Life Pavilion and was home to various interactive exhibits and the attraction Body Wars. When the pavilion closed its doors, guests were no longer able to venture inside, however there are certain times a year when they can explore the now defunct pavilion. During the Epcot Flower and Garden Festival in the spring, the Epcot International Flower and Garden Festival in the fall, and Epcot Festival of Arts in the winter, the pavilion is used as a festival center and guests can walk around inside and reminisce about the extinct Wonders of Life attractions.

Spaceship Earth is the most iconic attraction in Epcot, and it takes guests through time to explore how communication has evolved from the beginning of time to modern day. Throughout the attraction, guests pass by dozens of audio-animatronics so it makes sense that Imagineers utilized previously existing molds from The Hall of Presidents in the Magic Kingdom when creating the figures. Guests who look closely can spot William Taft as an Egyptian, Teddy Roosevelt as a Roman, James Buchanan as Gutenberg, and John Adams as a monk.

The Seas with Nemo and Friends Pavilion in Future World offers guests the chance to dive under the seas and explore the ocean floor with characters from the Pixar film Finding Nemo. Before the pavilion was updated in 2006 to include characters from the film, it was known as The Living Seas which had originally opened with the park in 1981. Guests who are looking to enjoy a bit of hidden Epcot history can try and find a plaque hanging outside one of the entrances to the pavilion. The plaque is from the original dedication of the pavilion and allows guests the chance to fondly remember The Living Seas.

While enjoying a stroll around World Showcase Lagoon, guests might not notice that they at one point walk over a drawbridge! When passing between the Outpost and the China Pavilion, the walking path become narrower and passes over a small creek. This section of path is actually a drawbridge which seamlessly blends in and appears to just be an overpass. At one point each afternoon, the bridge lifts high into the air for the large globe used during Illuminations: Reflections of Earth to pass through into World Showcase Lagoon for that night’s show.

Guests who are staying near Crescent Lake at resorts including Disney’s Boardwalk Resort, Disney’s Yacht Club Resort, and Disney’s Beach Resort might not realize that there is a second entrance into Epcot that they have access to! Located between the France and United Kingdom Pavilions in World Showcase is the International Gateway. This entrance into the park is always less crowded than the main Future World entrance and is a great way for guests staying nearby to save some time when entering into Epcot.

Journey Into Imagination with Figment in Future World takes guests into the Imagination Institute where Figment and Dr. Nigel Channing prove that imagination works best when set free. The original version of the attraction titled Journey Into Imagination featured Figment as well as Dream Finder, who traveled the world collecting imagination. Unfortunately Dream Finder can no longer be seen in the attraction today, but there is a clever tribute to him in the Imagination Institute. Guests should be on the lookout for an office door labeled “Dean Finder” which is a subtle but touching tribute to a long lost friend.

One of the biggest tips that guests can follow to get the most out of their day in Epcot is to line up early. Each night, World Showcase Lagoon comes to life with Illuminations: Reflections of Earth which combines laser lights, pyrotechnics, beautiful music, fireworks, and dancing water to create an unforgettable show. There are plenty of great viewing spots around World Showcase, however guests who are looking to get the perfect view should find a spot at least an hour before the show is set to begin. Illuminations is one of the most popular nighttime shows in Walt Disney World, and by lining up early guests guarantee that they will have the perfect end to a day in Epcot!