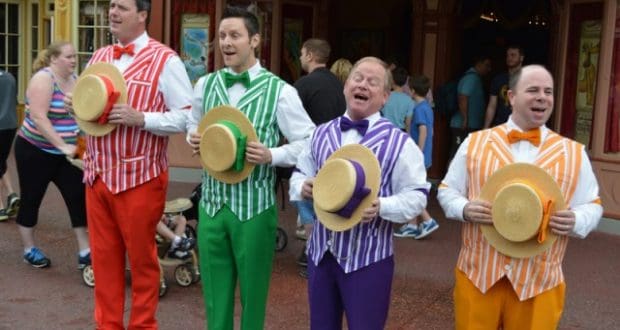 While this music is not performed live, the entire show features a medley of different Disney songs. This is my favorite 3D show at Walt Disney World because it combines great storytelling, with detailed effects, and of course excellent music. With the show based around Mickey’s philharmagic orchestra, it is no surprise that the music, albeit not live at all is a huge part of the experience.

The Voices of Liberty are the singers that can be found at the American Adventure pavilion at World Showcase in Epcot. They generally perform before the earlier showings of the American Adventure show inside the rotunda of the pavilion’s main building. The group’s singing is amazing, and they usually play a mix of classic Americana themed songs, along with new hits, like the occasional singing of Frozen’s, “Let it Go.” During the holiday season, the group can also be found performing in front of the choir in the Candlelight Processional. If you find that you really enjoy the Voices of Liberty, their CD is sold at the shops at the American Adventure pavilion and other various places around Epcot.

The Dapper Dans make up the barbershop quartet that perform on Main Street U.S.A. earlier in the day. If you happen to be on Main Street while the Dans are out, it is definitely worth your time to stop and watch their performance. In addition to playing some different instruments and tap dancing, the Dans sing beautifully and can easily make a simple barbershop quartet performance exciting for all guests. The Dapper Dans are such a classic part of the Main Street experience, so next time you notice them performing on your way into the Magic Kingdom, hold off on rushing to your favorite attraction and stop and watch their set first.

3. Beauty and the Beast Live on Stage

Before I watched Finding Nemo: the Musical for the first time, I was worried. I did not honestly think that adding music to a show that is based on a music-less movie would work. I cannot even begin to explain my surprise when this actually became one of my favorite shows at Walt Disney World. The original songs work very well, and they fit the storyline of Finding Nemo perfectly. Now I just wonder why this movie hadn’t been made into a live musical sooner. The performers in this show are also super talented (and much better at multitasking than I am!) They can sing, dance, and control puppets all at the same time, so I give them a lot of credit for that.

1. Festival of the Lion King

Now this is a show that can almost (but not quite, obviously) make up for you not being able to see the Lion King performed on Broadway. While this show is clearly shorter and a bit less detailed than its Broadway counterpart, it’s a fair comparison to say that this is a great way to see the Lion King performed if going to Broadway is not in your future. The music in this show is outstanding, and the costuming and visual effects are second to none as well.