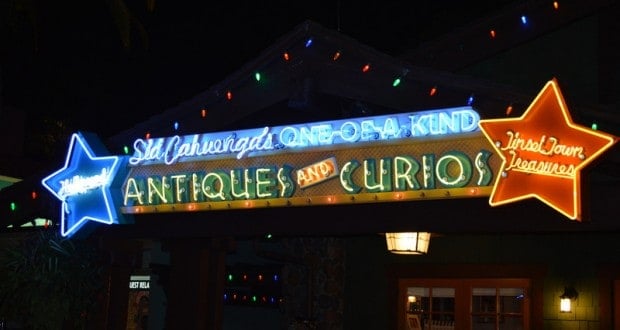 Disney’s Hollywood Studios in Walt Disney World brings guests into the golden era of Hollywood and allows them the chance to be the star in their own experience. With many different areas throughout the park, guests can watch Broadway caliber live stage shows, enter into the Star Wars universe, and even be an extra in a stunt scene featuring Indiana Jones. The area that greets guests when they enter into the park is Hollywood Boulevard which focuses on the glitz and glamour of the classic Hollywood of the 1930s and 1940s. Featuring many shops and stores and flagship attraction The Great Movie Ride, guests love spending time exploring Hollywood Boulevard and taking in all of the details that make the area seem so realistic. Among many of the details are hidden secrets which pay tribute to Hollywood, Disney history, and characters. Here are seven hidden secrets in Hollywood Boulevard in Walt Disney World.

Many details along Hollywood Boulevard can be found via signs in the windows of the second stories above each shop or store. One sign in particular pays tribute to the beginning of the animation career of Walt and Roy Disney. When the brothers were first starting out in California they rented space on the second floor of a building above a business titled Holly-Vermont Realty. Guests who look closely can spot a sign with the logo of the realty business accompanied by a sign on the second floor declaring it for rent and paying tribute to where the Disney legacy began.

A favorite Disney film of many guests is the 1988 release Who Framed Roger Rabbit? which combined live action and animation for one massive adventure. The film was set in Hollywood and guests can find a tribute to the main character of the film in a window high above Hollywood Boulevard. Hollywood & Vine is a buffet style full service restaurant which serves up breakfast and lunch to hungry guests. In a window above the restaurant, guests can spot the silhouette of Roger Rabbit smashed up against the glass trying to burst through into the street below.

The Great Movie Ride brings guests to the other side of the camera and allows them the chance to star in classic scenes from hit movies like Casablanca, The Wizard of Oz, Fantasia, and Tarzan. One scene which adds suspense and a little horror to the attraction brings guests through the ship Nostromo from the classic film Alien. While moving through the scene guests find themselves face to face with the deadly alien several times and see Sigourney Weaver as she fights for her life. Those who are seated on the left hand side of the massive attraction vehicles can look down near the floor in the Alien scene for a crew list which features several dozen names and the status of each person. These names are those of Imagineers and individuals who helped The Great Movie Ride become a reality and some can even be seen listed as missing or searching for others!

Right after guests enter into Disney’s Hollywood Studios they are greeted with a sweeping view down Hollywood Boulevard and the chance to stop and shop at Sid Cahuenga’s One-of-a-Kind store. The store sells items which pay tribute to the stars of Hollywood including autographed photos of actors and actresses. While Sid Cahuenga might seem like a made up name, it actually pays tribute to the residents of Hollywood who are nicknamed Cahuengas after the end of the Mexican-American war was resolved in California by the Treaty of Cahuenga. Guests love discovering that Sid Cahuenga actually has a rich history rooted in California and Hollywood!

The Great Movie Ride features one scene where guests find themselves in the underbelly of Hollywood and amongst gangsters of days past. Suddenly a bank robbery begins and the tour guide becomes kidnapped by the thieves and a gangster takes their place commandeering the attraction vehicle. Before the robbery begins, guests pass by famous actor James Cagney on the right and several massive posters on the left. Those who look closely at the posters will realize that one of the lower corners is ripped and the familiar yellow shows of Mickey Mouse are hanging down.

In the same gangster scene of The Great Movie Ride there is a reference to a particularly bloody day in the history of the city of Chicago. As the bank robbery begins a car pulls up on the right hand side of the attraction vehicle full of gangsters hoping to strike it rich. The license plate of the car reads “021-429” which might seem like a random string of numbers but actually stands for February 14, 1929 which is the date of the infamous St. Valentine’s Day Massacre and a historic gangster shootout.