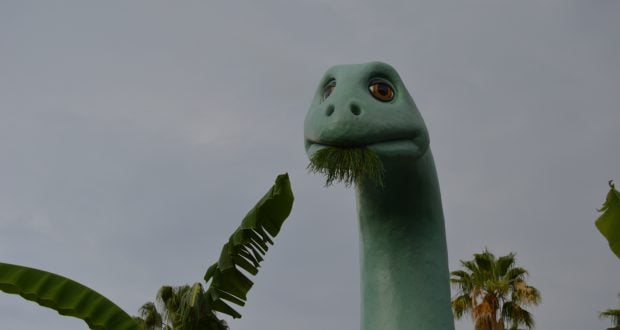 Disney’s Hollywood Studios invites guests into the glitz and glamour of Hollywood and allows them to be the stars in their very own amazing experiences. Guests who enjoy time in the park can step directly into classic movies like Casablanca and The Wizard of Oz, enter into The Twilight Zone and the Star Wars universe, laugh along with the Muppets, rock out with Aerosmith, and learn how big action stunts are executed safely. With so many amazing experiences to be enjoyed in the park, sometimes guests get caught up in trying to see it all and not slowing down to enjoy the details. Throughout Disney’s Hollywood Studios there are plenty of hidden details and secrets which are a lot of fun for guests to discover. Here are seven secrets that most guests don’t know about Disney’s Hollywood Studios.

In the Echo Lake section of Disney’s Hollywood Studios guests can enjoy a quick service meal from Min & Bill’s Dockside Diner. After ordering up their meals, guests should be sure to explore the area around the restaurant to enjoy views of the lake and find some great details which pay tribute to classic Hollywood films. Found near Min & Bill’s is a pile of shipping crates which might look like random props but have addresses and names that pay homage to classic Hollywood films like Casablanca, Citizen Kane, and The Producers.

Guests who visit Disney’s Hollywood Studios simply must stop by The Great Movie Ride for an unforgettable trip into the movies. Guests feel like they are on the other side of the camera and starring in films like Singing in the Rain, Mary Poppins, Fantasia, and Alien. Throughout the attraction there are plenty of Hidden Mickeys to find, and the first one can be found in the loading area where there is a large mural of Hollywood on the left hand side of the vehicle. Guests should look for a silhouetted outline of Minnie’s head and bow hidden amongst a cluster of trees. Once on board the attraction, guests should pay close attention to the left hand side of the scene depicting Indiana Jones and the Raiders of the Lost Ark. Found on that wall are a Hidden Mickey and Donald portrayed as a pharaoh and servant and a Hidden C3P0 and R2D2 from Star Wars!

Looming at the end of Sunset Boulevard is the Hollywood Tower Hotel which echoes with the screams of guests inside. The building is home to The Twilight Zone Tower of Terror which invites guests to star in their very own episode of the popular television series. After entering into the hotel, guests find themselves learning that five hotel guests disappeared one stormy night many years ago and are told the tale of what happened by host Rod Serling. Serling was the host of every episode of the television series and unfortunately he died many years before the attraction was constructed. Therefore guests who enjoy the preshow video in the library of the Hollywood Tower Hotel are watching a compilation of real clips of Serling talking combined with a voice actor impersonating him.

The Great Movie Ride features several scenes where guests find themselves in the middle of a climactic Hollywood moment including a dramatic gangster gun fight on the mean streets of the underworld. On the right hand side of the attraction vehicle, guests can spot a car that pulls into the scene and opens fire. Those who look closely will realize that the car’s license plate reads “021429” which appropriately represents the St. Valentine’s Day Massacre in Chicago that occurred on February 14, 1929.

One of the most unique and charming buildings in all of Disney’s Hollywood Studios is that of a green dinosaur along the shores of Echo Lake. Guests who pass by the dinosaur can even purchase ice cream from a small counter inside! The dinosaur is actually named Gertie and she has a rich Hollywood history starting in cartoons created by Windsor McCay from the early 1900s. McCay would perform a live act on stage in front of a cartoon of Gertie which would make it look as though he was interacting with her. Today guests can interact with Gertie by posing for photos near her in Disney’s Hollywood Studios.

One of the most thrilling attractions in all of Walt Disney World can be found right next door to The Twilight Zone Tower of Terror on Sunset Boulevard. The Rock ‘n’ Roller Coaster Starring Aerosmith brings guests into G Force Records where the band is recording their latest hit. After being invited to a concert across town, guests soon find themselves strapped into super stretch limos and rocketing through the neon lights of Los Angeles. While waiting to enter into the preshow area, guests should listen for a page that pays homage to a classic song by The Beatles. The page is trying to find someone named Jude and at one point calls out “Hey, Jude!”

Muppet Vision 3D is an attraction guaranteed to make even the grumpiest of guests laugh. The Muppets invite guests into their laboratories where they have discovered the spirit of 3D and chaos like only the Muppets can bring occurs along the way. Before heading into the main theater, guests can enjoy a hilarious preshow in a room filled with lots of props and silly items. Guest should look up to the rafters of the room to spot a portrait that pays tribute to Jim Henson. Henson created the Muppets and unfortunately passed away several years ago, but his memory is honored by a portrait of him as a Muppet in the preshow area.

2015-11-04
Caitlin Kane
Previous: 5 Reasons We Absolutely Love Walt Disney World Desserts
Next: 5 Amazing Things You Can Do With Your Magic Bands