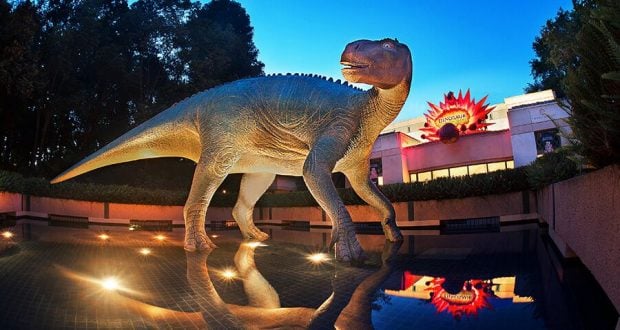 Disney’s Animal Kingdom is the largest of the four theme parks in Walt Disney World and invites guests to step into nature for one of a kind experiences that are sure to amaze them. Guests who spend time in the park can enjoy the beauty of nature and learn the importance of protecting it through wonderful experiences including an African safari traveling to the distant world of Pandora, a chance encounter with a Yeti, and even time travel. Dinoland is one section of Disney’s Animal Kingdom and it invites guests to celebrate all things prehistoric. The Dino Institute is home to the thrilling attraction Dinosaur which brings guests into the technological hub where scientists have perfected the ability to travel back to prehistoric times. Guests soon find themselves on a secret mission to bring one specific dinosaur with them back to modern times, but they encounter some big thrills and a close call with an asteroid along the way. In addition to being a thrilling and immersive attraction Dinosaur is also home to many amazing details and hidden facts that add a level of depth for guests to enjoy. From Hidden Mickeys to historical tributes, there are lots of great details to discover. Here are eight totally cool things bout Dinosaur in Disney’s Animal Kingdom.

When guests first enter into the Dino Institute, they move through an exhibit featuring some prehistoric creatures before entering into a rounded room featuring several murals and a massive dinosaur skeleton. While waiting in this room to move further through the queue, guests can enjoy a narration telling them all about the impact that the giant asteroid had on the dinosaurs millions of years ago. Many guests might find the voice familiar, and that is because it belongs to Bill Nye the Science Guy!

In the same rounded room, guests can check out the walls to spot some amazing detail that showcases different geological eras. Near the exit of the room is a sign that explains that the walls show the K-T Boundary. The K-T Boundary is a point in the Earth’s surface that distinguishes the Cretaceous and Tertiary Periods and is believed to be the indicator of when the massive asteroid impact took place!

Once inside the preshow room, guests are treated to a grand introduction by Dr. Marsh who heads the Dino Institute. After her brief speech, guests are transferred to the control room where Dr. Seeker is supposed to provide them with safety details. Instead Dr. Seeker explains the unauthorized trip that he has set up for guests to find on dinosaur in particular. While guests love to listen to Dr.Seeker, they might not realize that his full name is rather groan worthy. His full name is Dr. Grant Seeker!

After emerging from the preshow, guests move down a hallway and then down a set of stairs into the loading area. There guests get their first glimpse of the Time Rovers and move underneath an interesting set of pipes. There are a trio of pipes that are red, white, and yellow and each features a unique and complicated chemical formula. While they might seem like a randomly placed detail to add to the storyline, these pipes actually pay homage to Dinosaur’s first sponsor. When the attraction opened in 1998 it was sponsored by McDonald’s which makes sense as the pipes and their chemical formulas represent ketchup, mayonnaise, and mustard!

When Dinosaur opened in 1998 it was originally titled Countdown to Extinction. This title described how guests were about to experience a ticking countdown to the massive asteroid impact that killed most like on Earth. When the Disney film Dinosaur was release in 2000, the attraction’s name changed to help promote the film. The film also prominently featured an Iguanodon, which is the particular dinosaur that guests are on a mission to find. While the name of the attraction changed, there are still some remnants of its original version.

After boarding their Time Rovers and moving forward to the seatbelt check area, guests should look to their right hand side to spot a concrete wall with a series of letters on it. The string of letters reads WDI-CTX-AK-98. While these might seem like random letters and numbers, they actually pay tribute to many different things! WDI stands for Walt Disney Imagineering who conceptualized and created the attraction. CTX is a reference to Dinosaur’s original name of Countdown to Extinction. Finally AK and 98 reference Disney’s Animal Kingdom which opened in 1998.

After departing the seatbelt check area, guests emerge in a small room that has a large whiteboard and a desk on the left hand side. Those who look at the whiteboard quickly enough might be able to spot a Hidden Mickey! The classic Hidden Mickey is comprised of three circles drawn onto the whiteboard.

Shortly after the whiteboard, guests enter into the top secret room where their time travel actually occurs. The room is filled with metallic and futuristic looking details, but it actually was inspired by something pretty commonplace. The inner workings of the time travel room were inspired by the inside of a toaster!