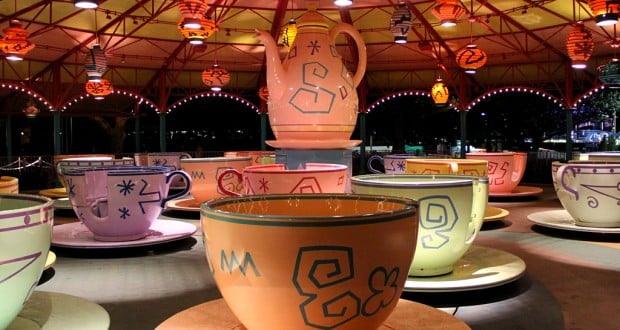 The Mad Tea Party is an iconic Disney ride that every Disney fan should experience at least once in their life. Kids love it—as do adults—and because riders control the spinning to come extent, the experience can be adjusted to suit everyone. Next time you’re in Magic Kingdom, be sure to check out this Disney Park must-do! Meanwhile, here are eight interesting Mad Tea Party facts to give you something to think about and help make the wait a little bit easier to bear.

Mad Tea Party seems to appreciate opening days. This super fun ride was available to guests on the very first day Disney World’s Magic Kingdom was open to the public. Additionally, early Disneyland guests could enjoy the Mad Tea Party ride when the California park opened in 1955. The ride was also available on opening day in Hong Kong and Paris, but came a full three years after the Tokyo park opening.

When Disneyland was celebrating its 50th anniversary in 2005, that park’s version of the Mad Tea Party ride received a golden teacup. This was to honor the ride as an opening day attraction, and other original rides such as Jungle Cruise, Dumbo, and Mr. Toad’s Wild Ride also received shiny gold bling to boast their status. We hope to see something similar for the teacups in Magic Kingdom when the Florida Resort celebrates its own 50-year anniversary.

For quite some time after Mad Tea Party opened in Disneyland, a design flaw caused the attraction to develop cracks on a daily basis. Ride maintenance crews spent around 2 hours each and every day welding these cracks before guests arrived. Fortunately, the problem was resolved, and the cups are no longer quite so fragile.

4. Spinning Around the World

As mentioned before, Mad Tea Party is an iconic Disney ride and is hugely popular with park guests. Luckily, these Alice in Wonderland fans have plenty of chances to hop in a tea cup and go for a spin. This is because there is a version of this ride in five of the six Disney resorts around the world. The only park without a version of Mad Tea Party is Shanghai Disneyland, where the spinning ride of the same style is themed after Winnie the Pooh.

Once in awhile, Disney World visitors are lucky enough to ride the tea cups with Alice, the Mad Hatter, or the White Rabbit. This is one of the only attractions that characters will ride on, and catching one of these Disney friends on the ride is quite a magical experience to say the least.

The design of the teacups on Mad Tea Party is super fun and whimsical. We have famed designer Mary Blair to thank for this fact. Blair was responsible for much of the early ride design throughout Disney parks, including the majority of the design work in  “It’s a Small World”.

It may seem like the crazy spinning of Mad Tea Party lasts forever, but in reality you’re only spinning for a total of about a minute and a half. That makes the teacups one of the shortest rides in the Magic Kingdom. Only a few rides meet Mad Tea Party at the 90-second mark, and only the Barnstormer is shorter, coming in at a minute and 3 seconds.

When the Mad Teacher Party opened in Disneyland, it didn’t have brakes or clutches, meaning there was absolutely nothing to limit the spin speed. The ride ran for two years before any sort of mechanism was added to slow the guest’s spin. For many decades after this addition, the ride remained the same speed. Then in 2004, a guest fell from a teacup, prompting Disney to slow the speed of their cups. However, Disney guests rallied against this and Disney supposedly brought the cups back up to speed sometime in 2005.

Did you enjoy reading about this wonderful Disney parks ride? If so, we know you’ll love riding it even more. Fortunately, FastPass is available for Mad Tea Party, and the standby wait is rarely very long. This means you can ride over and over until your stomach can’t handle it anymore. Just don’t eat a Mickey bar before doing so!