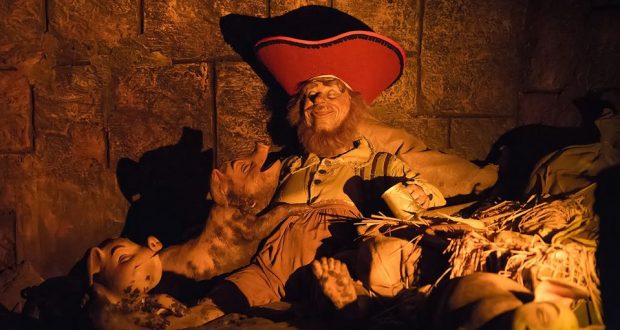 Throughout Walt Disney World’s four theme parks, there are plenty of iconic and beloved attractions that guests simply cannot miss on any vacation. Some of these attractions pack big thrills and others are more beloved for their memories from childhood, but they are all unforgettable. One of the most popular attractions in Walt Disney World can be found in a grand fort in the Magic Kingdom’s Adventureland. Pirates of the Caribbean invites guests to set sail with swashbuckling pirates and take to the seas for an adventure that they will never forget. The journey begins when guests board boats and sail through eerie caves that feature skeletal remains and haunting mermaid voices. The rest of the adventure showcases the chaos and hijinks of the pirates as they pillage and terrorize a burning seaside village. While many guests absolutely love to enjoy a ride on Pirates of the Caribbean, there are some interesting facts that they might not know about the attraction. Here are eight totally cool things about Pirates of the Caribbean.

Guests who move through the FastPass side of the queue for Pirates of the Caribbean have the chance to spot a wonderful detail that shows just how much attention Disney pays to keeping each moment totally immersive. Guests who look through a set of bars down into a cell below will spot two skeletal pirates locked in a chess match for all of eternity. The chess match was researched by Imagineers and is actually set up as a stalemate, really meaning that the skeletons would be stuck in that game forever!

After passing through the caves and skeletal remains of both pirates and mermaids, guests approach a skull and crossbones above that begins to suddenly talk to them. The skull a crossbones is a nod to a previous version that use to exist nearby, and this new version actually masks a camera that takes a great on ride photo of guests!

Just after the bright flash goes off and guests have their photo taken, they suddenly find themselves in total darkness plunging down a thrilling drop! The drop was added out of necessity since Pirates of the Caribbean was constructed after the Magic Kingdom opened. The Walt Disney World Railroad and its tracks already existed, so Imagineers needed to add in a drop to be able to get the boats to pass underneath the train tracks from the loading area of the attraction to the main show building.

One of the most iconic scenes of Pirates of the Caribbean is the auction scene where the Auctioneer can be found selling off brides from the pillaged town. While many guests are familiar with the character, they might not be able to place why his voice is so familiar as well. The Auctioneer was voiced by Paul Frees who can also be heard as the Ghost Host in the Haunted Mansion in the Magic Kingdom’s Liberty Square.

At one point in the auction scene, a pirate with the Auctioneer becomes irritated after other pirates are trying to sell bottles of rum instead of the desired gold. The pirate fires off his weapon, and in an act of great detail, a sign on the complete opposite of the scene begins to swing back and forth after emitting a metallic ping. Details like this showcase how in depth Disney is in creating the environments and immersive nature of attractions!

When Pirates of the Caribbean was first constructed, local fire chiefs and inspectors were called in to approve of the attraction and its safety before it officially opened to the public. The attraction was almost delayed as the fire officials though the flames throughout the burning seaside village were real! In reality, they are created by a little Disney magic and technology.

The final scenes of the attraction bring guests into an area where there is a cell on the right hand side of their vehicle and a massive treasure room with Captain Jack Sparrow on their right. Throughout these two scenes, there are several padlocks which can be spotted that are both locked and unlocked. Guests who look closely at them will noticed that they are a little misshapen and actually are Hidden Mickeys!

Just above the main entrance to the treasure room and Captain Jack Sparrow is a grand crest that reads “Marco Daviso.” While the name might seem random, it pays homage to Imagineer Marc Davis who was responsible for helping to create many iconic Disney attractions including Pirates of the Caribbean. It seems only fitting that he has such a wonderful tribute inside one of his most popular attractions!