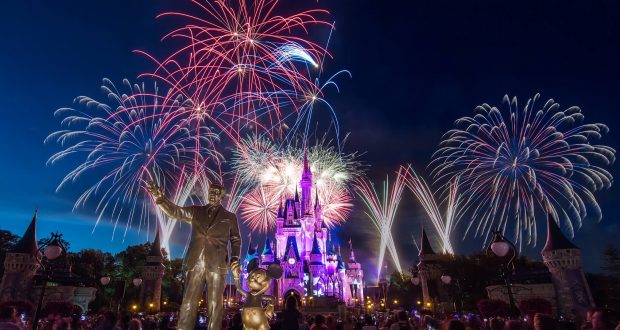 Guests who enjoy a Walt Disney World vacation can experience thrilling and classic attractions, over twenty different Disney Resorts, world class dining, shopping, live entertainment, and recreation. With so many amazing experiences to be had on one vacation, guests often forget that the legacy of Disney was created by a single man. Walt Disney began his career as an artist and animator and dreamed big enough to create an empire which boasts classic animated and live action films, theme parks around the world, and unforgettable vacations and experiences for families to enjoy together. While guests might know a lot about Walt Disney World from vacationing there, many don’t know much about the man behind it all except for the fact that the resort bears his name. By learning more about Walt Disney, guests can further appreciate the amazing vacation destination that is visited by thousands each year. Here are eight totally true facts about Walt Disney’s life.

Walter Elias Disney was born in Chicago in 1901 to Flora and Elias Disney. Guests who are aware of the year of Walt Disney’s birth can look closely throughout the Disney Parks to spot references to the number paying homage to him. Guests who are enjoying the Magic Kingdom should make note that the Emporium on Main Street was dedicated in 1901 and shares a birth year with Walt Disney.

Walt Disney was a huge train enthusiast throughout his life. He loved traveling by train and went so far as to create a miniature steam train that ran in his home’s backyard. The Carolwood Pacific Railroad was developed by Disney and Imagineer Ward Kimball and was big enough that guests could enjoy a scenic ride on it. Disney’s love of trains also translated to the Disney Parks around the world which feature steam engine locomotives that loop the parks. Guests who visit the Magic Kingdom can take a circle tour of the park on the Walt Disney World Railroad.

Walt Disney’s claim to fame was, obviously, Mickey Mouse. Mickey was originally created after Disney lost the rights to Oswald the Rabbit and the mouse captured the spirit and whimsy of his cartoons. Mickey first appeared in several short cartoons, but in 1928 Disney was the first to have a cartoon with synchronized sound. Steamboat Willie was a smash hit and many guests might not realize that Disney was the voice of Mickey Mouse. Disney thoroughly understood his creation and continued to voice Mickey until well into the 1940s.

Throughout his career, Walt Disney was the mastermind behind countless classic Disney films including Snow White and the Seven Dwarfs, Alice in Wonderland, and Fantasia. With a strong guiding hand and a thriving studio full of amazing artists, Disney racked up twenty two Academy Awards in his life and was nominated a whopping fifty nine times.

While Walt Disney was born in Chicago, his family moved to Marceline, Missouri in 1906 and remained there for a portion of his childhood. The large family lived on an idyllic farm and Disney enjoyed the country living as opposed to the city life that he was accustomed to. Disney had such a lasting affection for the small town that he loosely based Main Street in the Magi Kingdom on the childhood home.

While almost every person in the world knows the name of Mickey Mouse, Disney originally intended for the character to have a different name! When Walt Disney originally created Mickey, he dubbed him Mortimer Mouse but the name was soon vetoed and changed by Walt’s wife Lillian who thought that it did not sound appealing.

Walt Disney was an avid smoker who ultimately died from complications of lung cancer in 1966 at the age of 65. While he was sick towards the end of his life, Disney remained active in the studio for as long as possible. The final film that he had a creative hand in was the animated classic The Jungle Book which was released to much praise in 1967.

While Walt Disney is a huge role model to guests, many probably don’t realize that he was a high school dropout! Disney dropped out of high school at age sixteen and attempted to join the army for World War I. Rejected for being underage, Disney instead joined the Red Cross and was sent to France where he was an ambulance driver for one year.