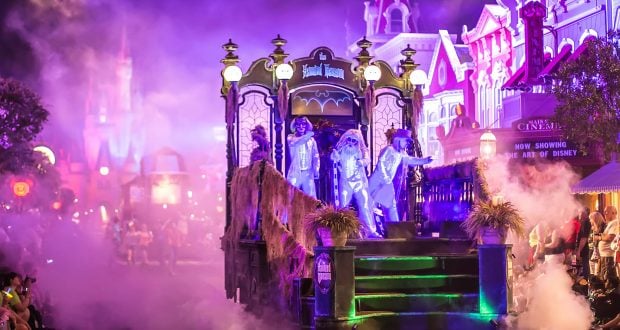 Mickey’s Not So Scary Halloween party is a ticketed event that occurs during part of September and all of October! There is separate admission for the event, so you will want to make sure you have your tickets purchased for the night that you are interested in. The parties aren’t scary in nature at all, but more focused on fun, candy and villains (plus all your other favorites) at this fun Halloween bash! Here are 9 facts and secrets about the party that you will definitely want to know:

Don’t forget to dress up! There will be guests there that go all out and are in perfectly themed and planned costumes. You will also find that there are numerous group costumes representing a particular movie, show, attraction, etc. You will be amazed at how creative guests can get with costumes and how much effort they put into them. You will want to be sure that your costume adheres to all guidelines that Disney publishes and check the guidelines directly with Disney. There are strict guidelines regarding masks, capes, etc. You don’t HAVE to wear a costume if you don’t want to, as there will be many guests in a Halloween-inspired t-shirt or simply wearing Mickey ears, but the costumes are definitely a lot of fun!

When you are at the party and you walk down Main Street USA, look up at the pumpkins that are in the balconies and windowsills above the shops on the street. You will notice that there are tons of different pumpkins. There are 176 pumpkins to be exact, and each one is unique and independently themed to add to the festive theming of the party!

Mickey’s Not So Scary Halloween Party first made its debut at the Magic Kingdom in 1994. This year will mark 25 years of Halloween fun for guests in the parks. The prices seem to go up each year as well as the number of parties, so Disney is definitely doing something right in order to keep bringing the guests in for the event year after year.

6. You get to see characters whose appearances are exclusive to the Halloween party.

Characters are some of the most beloved experiences and encounters when visiting Walt Disney World. We all have our favorite characters, and we also have a special love for characters that we don’t have the opportunity to meet or see in person very often. Characters that you would could get to see while at the party have included villains like Ooogie Boogie, Captain Barbosa, Dr. Facilier and Shenzi, Banzai, and Ed. You also get to see the hitch-hiking ghosts from the Haunted Mansion out in the parade, which is definitely a huge fan favorite. The headless horseman makes a grand appearance trotting down the parade path on his. Probably among the most desired is the meet and greet with Jack and Sally from Nightmare Before Christmas. Their line stays long from party start all the way until closing!

In 2015 a new stage show was introduced that featured the fan-favorite Sanderson Sisters from the live action Disney movie, Hocus Pocus. These sisters have never made an appearance at Disney World before, and it was a sensation. Almost all of the parties were sold out, and the show was deemed one of the best stage shows that Disney ever created! Now we just hope that Disney will add a meet and greet or a dinner party with the sisters! We would love it!

4. Did I mention that there is candy?

A LOT of candy. You seriously won’t believe the amount of candy you will come home with if you hit up the various candy spots as you pass from area to area. We are a family of 4, and we left one party with enough candy to completely fill one of the largest Tupperware bowls that they make, and still have enough candy left over to fill it again. Yes, they do give candy to adults, too! They give out so much candy in fact, that there is an average of about 10.5 tons of candy given out in a single night at one of the parties. The candy isn’t just “cheap, crappy” candy either. There are Hershey’s, Reese’s, Snickers, etc. It definitely isn’t diet friendly, but a great time and a way to get your supply for the year.

If you are a collector of various limited edition Disney items, or you love to shop, then this is for you! There will be limited edition merchandise, usually at least a Magic Band, shirt and pin, available only for party guests. The merchandise is only available to purchase during the party, so don’t forget to do your shopping, or you won’t be able to get it later! There also could be other merchandise since it can vary from year to year, so be sure to check your party guide to determine what merchandise there is and which store you will be able to find it in.

2. There is special lighting, sounds and music.

You truly get to experience the park in a way in which you can only experience it by attending one of the parties. The park completely transforms. There are fog effects, tons of extra lighting and lighting effects, villainous music playing all over the park that is different from the usual sound clips you would hear, the cast members are in special costumes for the party and so much more. It takes a lot of preparation to set up and prepare to host the parties, too. There is more than 23,100 feet of cable that has to be laid out and utilized for all of the effects and decorations. That equals to over 4 miles of cable that is used. That is more cable than it would take for you to make a loop through the entire park. Crazy, right?

1. Don’t forget that you can get into the park early.

While the party is technically from 7PM to 12AM each night, and you don’t need to have theme park admission outside of your party ticket to get in, you can actually get in before 7PM! You can start entering the park at 4PM, which gets you a full 8 hours for your cost of party admission. That ends up being a pretty good deal since the party tickets are much cheaper than the cost for one-day admission into the Magic Kingdom. This allows you to experience more of the park and even have dinner if you want to so that once the party starts you are ready to focus on the party!