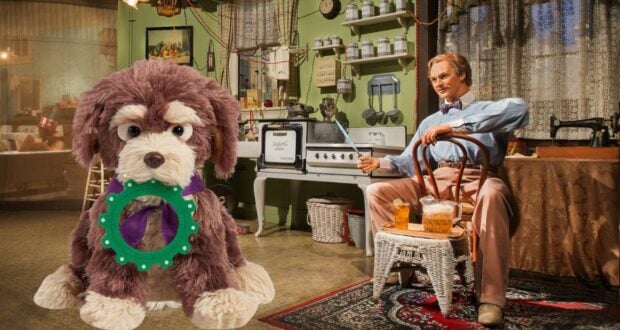 Amazon Is Selling an Exclusive “Rover” From Carousel of Progress

Presented inside a revolving theater, Disney fans may know Walt Disney’s Carousel of Progress as one of the most iconic attractions at Magic Kingdom as Walt Disney himself originally conceived the show idea. As Guests take a seat in the theater, it revolves slowly in a circle, with new scenes following an American family over four generations.

Over these four generations, one animatronic character remains unchanged… Rover, the family’s beloved dog. Of course, in dog years, Rover hangs around longer than he should – but it must be the pixie dust keeping him alive! Now, you can have your very own Rover right at home.

The Disney WDW 50th Carousel of Progress, Rover, Amazon Exclusive is available via Amazon for $29.99, plus shoppers with Amazon Prime get shipping for free. Rover has an adorable Walt Disney’s Carousel of Progress bandana and is holding a green progress wheel toy in his mouth.

He is ADORABLE! Be sure to snag your Rover soon, as we suspect this 50th Walt Disney World collector’s item will sell out fast. Happy shopping, Disney fans!