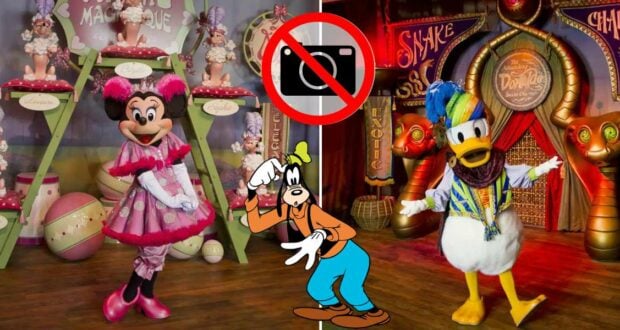 Character meet and greets have continued to expand and reopen at the Walt Disney World Resort since the theme parks reopened in the summer of 2020.

While every single character experience once offered has not yet returned to each Disney Park and Resort, the majority of the most popular meet and greets have returned, but there is one catch with the latest location to reopen.

RELATED: Is Memory Maker Worth the Cost?

In 2019, the Walt Disney World Resort made the controversial decision to use automated cameras at select character meet and greets instead of PhotoPass photographers. The change was most noticeable at the meet and greet with Mickey Mouse in Town Square Theater in the Magic Kingdom, with many Guests left disappointed by the automated camera’s inability to capture candid interactions (or frame the shots well) like a human photographer would.

Moreover, many Guests have agreed that automating the process simply took away some of the magic of these interactions, both with the characters and with the photographers themselves. RELATED: Will We Ever See These Disney Characters in Walt Disney World?

The latest character meet and greet location to reopen at Walt Disney World is Pete’s Silly Sideshow in Storybook Circus, a part of the 2012 New Fantasyland expansion (or rather, a reimagining of the former Mickey’s Toontown Fair.) Pete’s Silly Sideshow includes classic Disney characters as they take on roles in the circus, including “Minnie Magnifique,” “Daisy Fortuna,” “The Astounding Donaldo,” and “The Great Goofini.”

This location only reopened last week, and since Guests have been able to visit fans have noticed that a PhotoPass Cast Member is noticeably missing and they have indeed been replaced by an automated camera. @wdwmickeyhunter shared the observation on Twitter following:

Pete’s Silly Sideshow has reopened without photopass photographers. We visited Minnie Mouse and Daisy Duck first. They have returned in the same outfits they wore before the closure. #MagicKingdom #PetesSillySideShow #StorybookCircus #MinnieMouse #DaisyDuck #WaltDisneyWorld #WDW pic.twitter.com/BH25gNcMQs

Despite the rest of this character experience remaining the same as it was before its 2020 closure, many fans agree that the addition of automated cameras is disappointing, especially in a location that allows Guests to meet four characters.

Disney has not commented on the automated cameras, and while it is possible that they are temporary and the consequence of continued staffing challenges, they are likely sticking around at least for the immediate future.

We at Disney Tips will continue to monitor updates to Disney World’s character meet and greets, and will be back with additional information as we have it.

2023-01-16
Brittany DiCologero
Previous: EPCOT’s Figment-Inspired Treats Keep Coming With the Newest Passholder Special
Next: This Iconic Splash Mountain Signage Has Been Removed Due to Guest Behavior