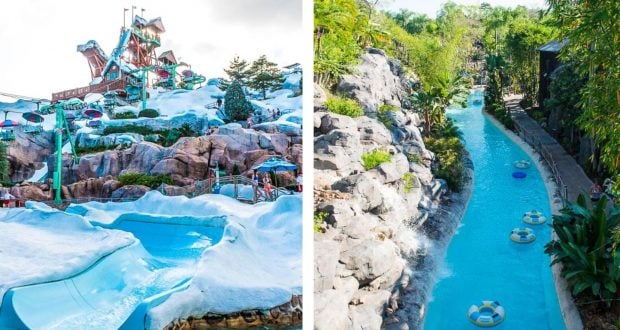 Blizzard Beach vs. Typhoon Lagoon – Which To Choose?

The heat is here, and that means it’s time to slip into a swimsuit and hit up a Disney water park. However, many people are a bit stumped when they find out Disney actually has two water parks. How are they supposed to choose between two equally amazing places? Honesty, this is a hard decision even for us, the Disney experts. However, there are a few factors that may help you make the right decision for your family. Here’s what we’ve learned about these two super fun parks.

One of the things Disney does best is theming, and their water parks are no exception. Wondering which water park has the best theming? Read on!

A good number of people who visit Disney bring kids with them. Therefore, we are going to address the kid areas at each park to give you an idea of what your little ones might have to do.

Slides are the number one reason thrill seekers visit water parks. Because of this, sides definitely deserve a bit of discussion. Here’s what we think.

Wave pools are an integral part of any water park. After all, who doesn’t enjoy jumping waves as though they were swimming in the ocean? We definitely have a favorite Disney wave pool. Keep reading to learn which it is.

Another key feature of any water park is the lazy river. Floating around aimlessly after a day filled with thrilling slides and jumping around in wave pools certainly does have a certain appeal. Here’s what we think of Disney’s two lazy rivers.

Finally, we must examine the two family raft slides available at the parks. These rides are some of the most fun out there because they allow you to ride with a whole group of people.

In our humble opinion, Typhoon Lagoon is the best water park to visit in most instances. That said, Blizzard Beach is ideal for those with young children or families with children in different age categories thanks to their two kid areas. Thrill seekers may also prefer Blizzard Beach. Either way you go, you’re sure to have a blast!