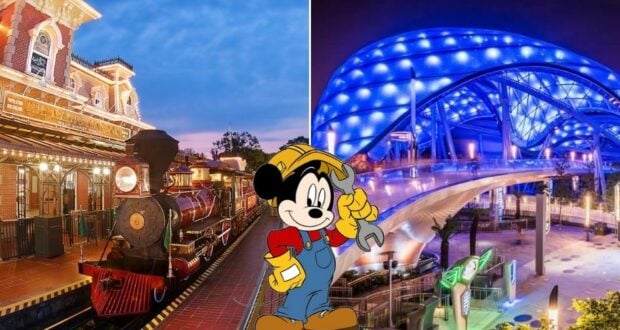 Progress! As Guests enjoy that magic of the Magic Kingdom Park, we are seeing more of the newest Tomorrowland attraction take shape while preparing for the return of an iconic ride.

Walt Disney World Resort recently teased that the Walt Disney World Railroad is moving along with its maintenance. The beloved train attraction has been closed since December 2018 as Disney needed to make space and alter the train tracks for the incoming TRON Lightcylce Run.

Little did we know at the time of the Railroad closure that the TRON coaster would actually take longer to build than the Magic Kingdom Park itself! But, alas, we’re beginning to see the steam train tunnel take shape as it will roll through the highly-anticipated TRON Lightcycle Run.

Disney has recently dropped new updates about the work on the TRON ride system which is encouraging to see the progress for the massive rollercoaster. Disney Guest @bioreconstruct has also shared photos from late March of the TRON canopy progress along with images of the train tunnel construction.

First up, in the photo above, you’ll spot only a small portion of the TRON canopy frame left to cover, as seen from the Fantasyland portion of Magic Kingdom.

From outside of the Park, @bioreconstruct spotted the wind pushing against the inflated TRON canopy in the photo above.

Back in the Park, here’s an excellent close-up of the Space Mountain side of the steam train tunnel as it will roll through TRON. The yellow arrow shows some openings in the wall.

This photo above shows a section of TRON’s roof over the steam train tunnel which will move through the TRON site.

Above, @bioreconstruct captured the TRON canopy starting to rise near the show or gravity building which will surely be stunning when it is all complete.

Another excellent shot of the current work at the TRON attraction entrance. The TRON ride vehicles will launch from underneath the walkway for a swoop of outdoor track under the canopy.

Last but not least, here’s a photo pointing out where the TRON vehicle will launch (near the yellow arrow) for an outdoor swoop of track under a canopy. Guests will access the attraction from an elevated walkway over a steam train tunnel (blue arrow).

We’re thrilled to see the progress! Disney has yet to reveal when the new Magic Kingdom rollercoaster will reopen along with its very missed Walt Disney World Railroad. We’ll be sure to share any updates as soon as Disney releases them.