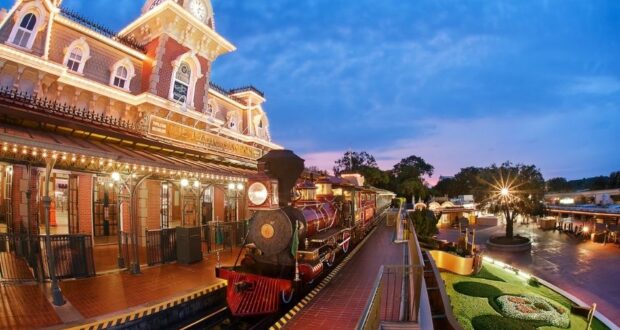 After Over 1,200 Days of Silence Disney Talks About Its “Temporarily Closed” Railroad

YES! It looks like it’s FINALLY happening Disney fans. Could the Walt Disney World Railroad be reopening soon? After over 1,200 days of being “temporarily closed”, Disney breaks its Railroad silence.

The Walt Disney World Railroad at Walt Disney World Resort is a nostalgic Disney experience. The attraction would take Guests on a 1.5-mile scenic round-trip tour around the Park with three train stations to board or disembark in various areas of the Park including near the entrance to the Park on Main Street, U.S.A., the Frontierland station, and the Fantasyland station.

Disney Park Guests would climb aboard one of four vintage narrow-gauge steam trains which were originally built between 1916 and 1928. The full round-trip train ride was roughly a 20-minute ride with the clamor of the engine, the chug of the wheels, and the call of the whistle as you rode along all being part of the incredible experience.

Sadly, the WDW Railroad has been closed since December 3, 2018, due to the construction work for a highly-anticipated attraction coming to the Tomorrowland portion of the Magic Kingdom Park. While TRON Lightcycle Run has taken longer to build than the Magic Kingdom itself, we’ve been hoping Disney would reopen the Railroad soon as progress moves forward on the Tron coaster construction.

And now, Disney breaks the silence! Disney Parks TikTok released a video with a behind-the-scenes look at the Walt Disney World Railroad and its current testing by noting, “Choo Choo! Testing is just beginning for the Walt #DisneyWorld Railroad crew.”

Did you catch that? The Cast Member says they “are getting closer to bringing the railroad back in”.

Did you know the Railroad was inspired by Walt’s lifelong passion? Disney shares:

“A noted train enthusiast, Walt Disney built his very first railroad in his backyard. The Carolwood Pacific Railroad, a 1/8-scale train, debuted in 1950 and featured a custom-built, steam-powered locomotive that encircled his property.”

“Delighted with his miniature backyard railroad, Walt decided to share his love of trains with the whole world. The result was the Santa Fe & Disneyland Railroad, a favorite of Guests since the Park opened in 1955.”

We’re so ready to ride the Walt Disney World Railroad once again!

2022-03-25
Jamie Sylvester
Previous: The Thing At Disney World That “Stares Into Your Soul”
Next: Disney Reveals Sneak Peek At New Toy Story Hotel