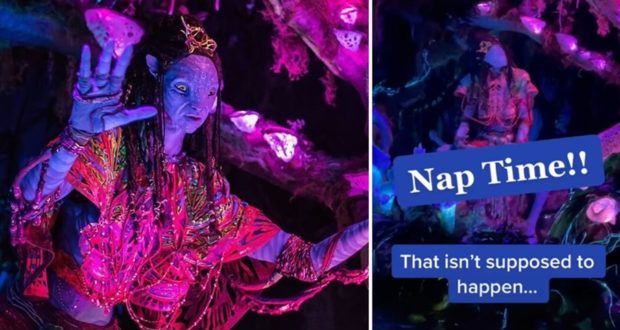 A “Mystical River Ride” awaits at Disney’s Animal Kingdom Park! Even though Pandora – World of Avatar has been open since May 2017, Disney fans still flock to the popular portion of the Park. Two attractions including Avatar – Flight of Passage and Na’vi River Journey call Pandora home. And while the land is sheer perfection in how beautifully done it was, not everything can be without fault from time to time. Unfortunately, this past week has been an interesting one for Disney Park animatronics. Most recently, a Navi animatronic malfunctions.

First, we saw Abraham Lincoln looking like he was taking a final bow as he malfunctions at The Hall of Presidents in Magic Kingdom. Over in Fantasyland, on another Disney ride, Ariel seemed like she needed a break on Under the Sea – Journey of The Little Mermaid. Even the Orange Monorail to lost power with stranded Park Guests. Well, now another animatronic malfunction video has been shared, showing the massive Na’vi Shaman of Songs taking a little nap mid-song.

As Guests glide down the Na’vi river taking in all the beauty of the dreamscape, the attraction has an impressive ending with a massive animatronic known as the Shaman of Songs. As shared by Disney, “The legendary Na’vi Shaman of Songs demonstrates her deep connection to the life force of Pandora and sends positive energy out into the forest through the power of her music.” With many moving parts and constant operation, it seems like the Shaman of Songs animatronic decided to nap mid-song.

@erinn_disneyplanner took to TikTok to share: “Na’vi River Breakdown!” with the video below. You’ll see the Shaman animatronic singing and dancing beautifully… but then suddenly malfunctions into nap-mode:

Well, it happens! We know Disney’s mechanics were working their magic to wake the Shaman of Songs back up quickly! While yes, it’s been a tough week in the animatronic world, Disney Imagineers are working to improve and create new robots/animatronics as we speak. Have you ever seen one of the 6,000 plus Disney animatronics malfunction?