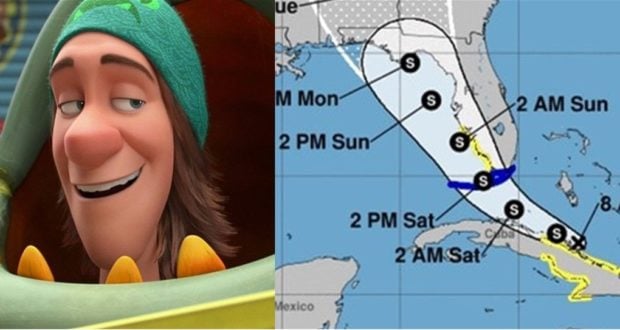 Ok, Walt Disney World travelers! Earlier this week we shared the news that Tropical Storm Fred was forecasted with Central Florida in the cone of uncertainty. While you’ll still want to prepare for a good amount of rain, it looks like your vacation won’t be a huge washout! Rather, Fred is “poorly organized” and seems to be shifting west of Flordia – with Walt Disney World for the most part out of the cone of uncertainty.

Since we are right in the middle of hurricane season, this seems to be the best news possible for now. This season we’ve seen the rains Hurricane Elsa brought with her to Florida. We hope Fred continues to remain poorly organized. And yes, much like Elsa, we can’t help but think of Disney character Fred from Big Hero 6. He’s a sweet guy – but “poorly organized” could describe his demeanor as well!

As reported by OrlandoSentinel: “Tropical Depression Fred is moving northwest from Cuba and should regain its tropical storm status in the next 12 hours. Fred’s cone of uncertainty shifted west so that much of Central Florida is out of the projected path. Although the area is likely to receive heavy showers with most of Fred’s strength east of its center, the NHC said. Forecasters say Fred remains poorly organized. At 8 a.m., Fred was 315 miles east-southeast of Key West with maximum sustained winds at 35 mph. Fred is turtling west-northwest at 10 mph and should be near the Florida Keys Saturday, and near Florida’s West Coast Sunday.”

So, there you have it! Our fingers are crossed Fred continues to push west for all those Walt Disney World visitors. And more so than anything, we hope Fred remains fairly week for the Gulf Coast Disney fans. If visiting the Parks this weekend, you’ll still want to keep a close eye on the National Hurricane Center for updates. Don’t forget those ponchos and/or umbrellas and a good pair of fast-drying shoes! Here’s a helpful article with tips for surviving a rainy day at Walt Disney World.