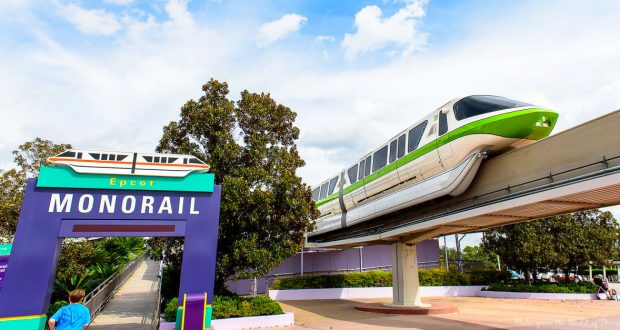 If you’ve ever visited the Most Magical Place on Earth, you’re more than likely familiar with the Walt Disney World Monorail system. The iconic transportation system at Disney World has been in existence since Magic Kingdom first opened nearly 50 years ago in 1971. It’s fun to ride, allows you to relax on your way to and from Magic Kingdom and/or Epcot, and it’s part of the Disney World experience, but there’s so much more to the monorail. Check out these 8 interesting facts about the system.

You might think that the Walt Disney World monorail trains ride along a short track. But in reality, there are almost 15 miles of track as part of the system. That’s almost the distance from Walt Disney World to Orlando International Airport!

7. Monorail fleet trains are referred to by their colors.

6. Sometimes the trains serve as advertisements.

5. The monorail is flexible with times.

The monorail transportation system operates daily, beginning 30 minutes before the earliest park opening (Magic Kingdom) until 60 minutes after the park’s latest closing. This allows Guests to get to the park early enough to enjoy the sights and sounds of Magic Kingdom as Guests are first arriving. It also allows Guests time to leisurely exit the park in the evening. Be sure to check park operating hours before visiting, as they are different right now because of COVID-19 procedures.

4.  Once upon a time, Guests could be co-pilots.

Well, sort of. Before 2009, as many as 4 Guests could be seated in the same area as the monorail pilot. That experience gave Guests a unique view as the monorail made its way between stations and stops. Though this experience is no longer available, there are times when pilots will allow Guests to see the pilot’s cabin while the monorail is parked. This may be affected by COVID-19 procedures currently.

Though the monorail system has experienced incidences of train mechanical failures and problems from time to time, as well as an accident in July of 2009, the monorail system is very safe. It’s been in operation for almost 50 years and maintains an exceptionally good track record. (No pun intended!)

2. The monorail system by the numbers is impressive!

How about these numbers—the Disney World monorail system serves more than 150,000 riders daily (outside of pandemic season). The system boasts 3 lines and 6 separate stations. It’s been in operation for just under 50 years, and its trains travel at an average speed of around 40 miles per hour but can reach a top speed of up to 55 miles per hour.

1. You can ask for monorail souvenir cards.

When you’re waiting to board a monorail train, pass the time by asking a pilot or monorail system team member for monorail train collector’s cards. Each card gives the details and specifications of one of the monorail trains. They aren’t always available, but they are fun to collect and make unique (and cost-free) souvenirs. How many have you collected so far?