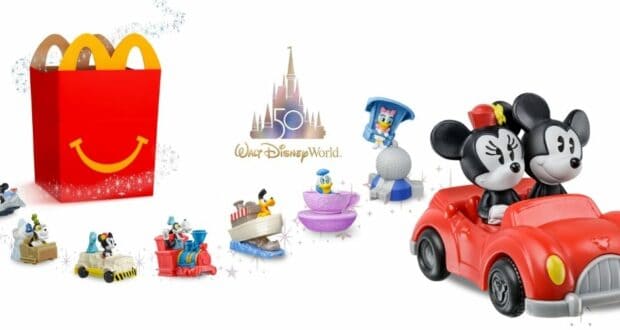 Calling all Disney collectors! We have some interesting news as the popular fast-food chain, McDonald’s has re-released select Disney Happy Meal toys.

Disney has also partnered with McDonald’s to release Stitch-themed Happy Meal toys which were popular collectors’ items as well.

But, flashback to fall 2020 with us when McDonald’s rolled out special Happy Meal toys to celebrate the opening of Mickey and Minnie’s Runaway Railway at Disney’s Hollywood Studios.

You may remember, that McDonald’s pulled the toys after a week due to a QR code error in the game pieces included with the toy package. We’re now seeing select toys re-released, this time without the game pieces.

The re-released Happy Meals toys now include eight of the initial ten Disney ride-vehicle toys with iconic characters including:

The two missing Happy Meal toys from the initial launch in fall 2020 include Tower of Terror with Mickey Mouse and Pirates of the Caribbean with Minnie Mouse.

As shown in the photo above, all of the toys connect to form a train of Disney ride vehicles to pull along!

It is not noted on the McDonald’s website how long the Disney-inspired Happy Meal toys will be available. We suggest you don’t wait and head to McDonald’s for a yummy Happy Meal box and a collectible Disney toy to go along with it.