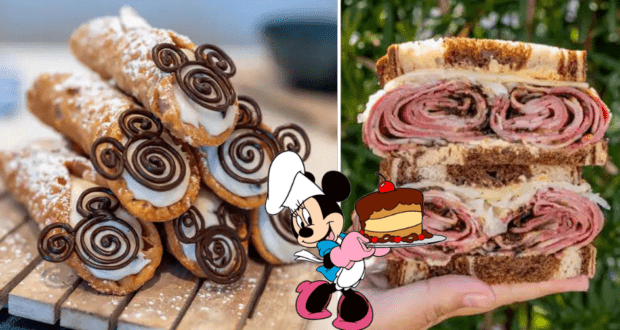 The new Boardwalk Deli will be coming to Disney’s Boardwalk later this summer, and we’ve got the latest on some of the yummy offerings that will be available! The deli replaces what was previously known as the BoardWalk Bakery at Walt Disney World Resort.

Disney Parks Blog just shared the menu, which includes savory and sweet options inspired by delis in the Northeast, particularly from New York to New Jersey. A sandwich shop would not be complete without some tantalizing, classic bagel options, so let’s start with those! Some of the varieties Guests can look forward to include the Everything Bagel Sandwich and Bagel Breakfast Sandwich. Other breakfast options include the Plant-based Ciabatta Sandwich and Veggie Crunch Muffaletta, which contains pickled vegetables, an olive-giardiniera tapenade, and plant-based cheese, served on focaccia bread.

In addition to bagels and breakfast options, some delicious soups and sandwiches headline the menu. The Roasted Chicken Sandwich is served with roasted garlic aioli and comes on chewy, ciabatta bread. Or, if you’re in the mood for the classic soup and sandwich combo, opt for the Grilled Cheese Sandwich with tomato soup. The deli also serves delicious, homemade, whole dill pickles, much like the kinds we see in Disney Parks, and they can be added to your main course. All the sandwiches on the menu are served combo-style with your choice of house-made chips, coleslaw, or soup.

For those who like to round out their meal with something sweet, there are a vast array of mouthwatering delicasies to sample! From Cannolis filled with creamy mascarpone cheese to blueberry scones elevated with crème fraiche, the deli offers dreamy desserts with magical Disney touches. An ode to the East Coast, the New Jersey Crumbcake and New York-style Half-moon Cookie add a flavorful touch to the dessert menu. A Guest favorite, the Cinnamon Yummies, will return to the lineup, as well as classic treats such as cookies and brownies.

Oh, and don’t forget to try the 5oth Anniversary Celebration Cupcake! It looks both beautiful and delectable!