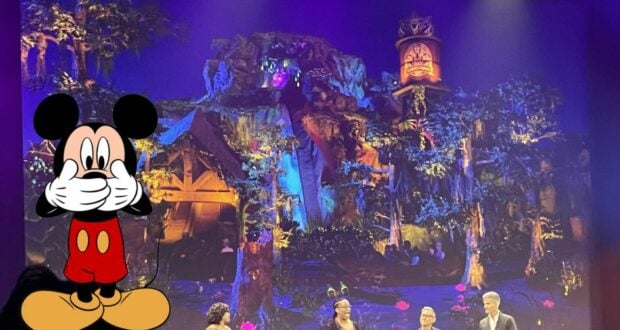 It’s an incredible time to be a Disney fan! The massive 2022 D23 Expo is underway, and Disney is sharing news of new attractions, experiences, and beyond with their fans for the years to come. We here at Disney Tips are at the Expo and were fortunate enough to be in the panel reveal, in which Disney dropped several details about the upcoming Splash Mountain retheme… “Tiana’s Bayou Adventure.”

It’s no secret that the iconic Splash Mountain attraction at both Walt Disney World Resort and Disneyland Resort is preparing for a transformation. With Disney’s push to be more “inclusive,” the attraction has reached the chopping block as its Song of the South theme has been categorized with racist connotation.

While we will miss Br’er Rabbit, Br’er Fox, and Br’er Bear, we are intrigued by the incoming theme featuring The Princess and the Frog. Princess Tiana will be taking over the attraction with “Tiana’s Bayou Adventure” in late 2024.

Not only was there a loud round of applause when Tiana’s Bayou Adventure was first shown on the screen, but when the nighttime projection showed… Disney fans had an incredibly positive reaction to the beautiful art rendering being shown.

With the amount of Disney fans cheering about the attraction (especially it’s nighttime look), we believe overall, the die hard Disney fans at least at the D23 Expo are thrilled to see the change. In fact, there was no mention of Splash Mountain in the Expo at all, but just the name “Tiana’s Bayou Adventure.”

Along with fan’s reactions, Disney has revealed the following details about the new attraction coming in later 2024:

Tiana’s Bayou Adventure will open at the Disneyland Resort (and Walt Disney World Resort) in late 2024. The new attraction’s story will pick up right where “The Princess and the Frog” left off. At the end of the film, Princess Tiana realizes her lifelong dream when she opens her restaurant, Tiana’s Palace. We pick up the story during Carnival season, when Tiana is hosting a party for the people of New Orleans. She discovers her celebration is missing a key ingredient and needs our help to find it. On Tiana’s Bayou Adventure, we’ll join Tiana and Louis on a trip to the bayou, where they meet all sorts of unexpected new friends who have a special role to play at the party.

The attraction will get a whole new look and feel. Plus, Imagineers are blending tried-and-true techniques with the latest technology to make this feel like an entirely new attraction.

Additionally, it was announced that talented voices from the film will reprise their roles in the attraction, including Bruno Campos as Prince Naveen, Michael Leon Wooley as Louis, Jenifer Lewis as Mama Odie, and the one and only Anika Noni Rose as Princess Tiana. This is especially exciting news since music will be a big part of the experience on Tiana’s Bayou Adventure.

The experience will surely be an interesting one to experience! We love that Disney has incorporated nighttime technology to help this beautiful attraction glow in the evening.

As always, we’ll keep Disney Tips readers informed as we learn more about Tiana’s Bayou Adventure and the closure of Splash Mountain in the coming years.