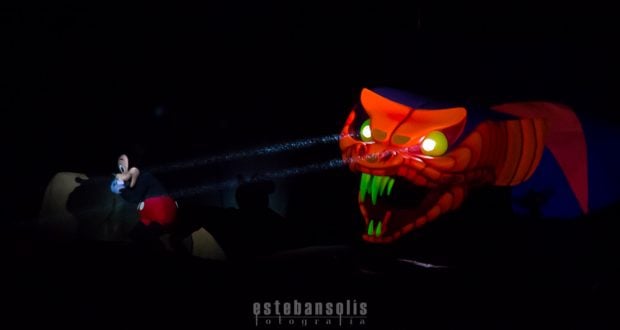 Disney’s Hollywood Studios is currently under construction with new attractions on the horizon! In the meantime, we still find this park full of mind blowing experiences that are well worth a park ticket! Guests can enjoy rocking out with Aerosmith, entering into The Twilight Zone, playing with the Toy Story characters, blasting off into space in the Star Wars universe, and laughing along with the Muppets. With so many amazing experiences to enjoy in Disney’s Hollywood Studios, guests might become a little overwhelmed trying to decide what are the must do attractions and entertainment. While each experience in the park is amazing, there are some that are truly mind blowing and definitely shouldn’t be missed while enjoying time there. Here are 11 mind blowing experiences to enjoy at Walt Disney World’s Hollywood Studios.

1. The Twilight Zone Tower of Terror

Sunset Boulevard is home to two of the most thrilling attractions in Disney’s Hollywood Studios, one of which beckons guests in with the sound of screams. The Twilight Zone Tower of Terror brings guests into the abandoned Hollywood Tower Hotel where five guests mysteriously disappeared on a fateful night many years ago. After boarding a rickety service elevator, guests soon find themselves at the mercy of the tower and on their way directly to The Twilight Zone.

Found right next door to The Twilight Zone Tower of Terror, the Rock ‘n’ Roller Coaster Starring Aerosmith brings guests into G Force Records where the band can be found in the studio working on their next hit. Guests soon find themselves invited to a concert across town and strapped into super stretch limos which rocket throughout the neon lights of downtown. The rocking adventure is accompanied by a pumping soundtrack of classic Aerosmith songs and is an experience that definitely shouldn’t be missed!

Who’s up for a ride on the new Slinky Dog Dash at Hollywood Studios? Toy Story Land has crowds flocking to it for all the right reasons. This fun, new land makes guests feel as if they’ve shrunk down to the size of toy and are exploring Andy’s backyard with his beloved toys. Slinky Dog has joined in the fun with smooth dips and turns on his roller coaster! This is a great family-friendly coaster that is sure to be a favorite after just one ride. Have a blast with the breeze in your hair… just don’t forget to look around at all the awesome sights you’ll see across Andy’s toy-filled backyard. Finally, pull in for a stop to hear the sweet audio-animatronic Wheezy the Penguin singing for all the Slinky Dog Dash guests to enjoy.

Not to be forgotten! Toy Story Mania magically shrinks guests down to the size of toys and incites them to compete in a series of 3D midway games hosted by the beloved characters of the Toy Story films. Guests absolutely love competing in the silly and thrilling 3D midway games and love to ride again and again to see who can achieve the highest score.

Joining the Rebel Alliance is easy on any visit to Disney’s Hollywood Studios. Guests who are fans of the Star Wars universe will absolutely love Star Tours – The Adventure Continues. Guests board what begins as a routine Star Tours flight that soon takes a thrilling turn once a Rebel spy is discovered on board. Each experience on Star Tours – The Adventure Continues is unique in that 3D scenes are randomly generated, making each sequence totally different. Guests absolutely love the thrills and unique experiences offered on this mind blowing attraction in Disney’s Hollywood Studios.

Found nearby Star Tours – The Adventure Continues is an attraction that is sure to leave guests cracking up. Muppet Vision 3D invites guests into the laboratories of the Muppets where they have discovered the spirit of 3D. Chaos soon ensues like only the Muppets can create and guests will love a show stopping finale that nearly brings the theater down!

7. Beauty and the Beast – Live on Stage

Another amazing live show to enjoy in Disney’s Hollywood Studios can be found on Sunset Boulevard near The Twilight Zone Tower of Terror and the Rock ‘n’ Roller Coaster Starring Aerosmith. Beauty and the Beast – Live on Stage brings the tale of Belle meeting the Beast to life through live acting, beloved characters, musical numbers, and special effects. While this show is very popular with guests, it only runs several times each day in Disney’s Hollywood Studios so guests should be sure to consult a times guide for show times.

Guests who are fans of the Indiana Jones film series will absolutely love a live show in Disney’s Hollywood Studios which brings the adventures and thrills of Indy to life. The Indiana Jones Epic Stunt Spectacular! demonstrates to guests how the big action stunts and scenes are safely executed in the films. Guests can observe recreations of classic moments from the films as well as have the opportunity to be selected to be part of the show. Like Beauty and the Beast – Live on Stage, the Indiana Jones Epic Stunt Spectacular only runs several times each day so guests should consult a times guide for show times.

9. March of the First Order

No day in Disney’s Hollywood Studios is complete without the mind blowing show Fantasmic! The show is housed in the Hollywood Hills Amphitheater on Sunset Boulevard and brings an epic tale of good versus evil to life through Mickey’s imagination. Guests who enjoy the nighttime show can check out fireworks, pyrotechnics, special effects, classic Disney music and characters, projected animation, dancing water, and beautiful floats. While Fantasmic! can accommodate a very large crowd, the Hollywood Hills Amphitheater often fills on busy nights, so guests who want prime seating should plan on lining up at least an hour before show time.