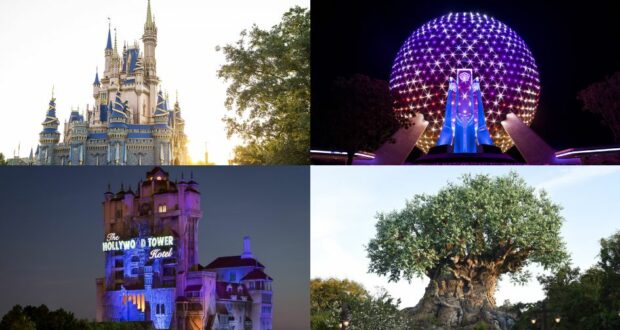 If you haven’t already, NOW is the time to start planning the Walt Disney World Resort vacation of a lifetime! With only a few more months left in 2022, let’s turn our focus to 2023 with new and returning theme park experiences you won’t want to miss in the new year.

First up, let’s begin at the most magical of Disney World Parks… Magic Kingdom, of course! In 2022, we’ve watched experiences return such as parades and character hugs. As we turn to 2023, here are the top experiences for Magic Kingdom Park Guests to get ready for.

YES… Disney has promised it is FINALLY happening! After being announced 6 years prior, the highly-anticipated TRON Lightcylce / Run roller coaster attraction in Tomorrowland is scheduled to open to Guests “Spring 2023.”

With the news of TRON opening, this also means the Walt Disney World Railroad can resume its journey in a loop around Magic Kingdom Park. The attraction closed in 2018 as Disney has had to work to build a tunnel through TRON so the iconic attraction can function. No opening date has been mentioned just yet for the train, but we believe it will be in alignment with TRON’s opening.

Return of Happily Ever After

Goodbye, Disney Enchantment! Despite Disney’s effort to update Disney Enchantment, the 50th Anniversary nighttime spectacular wasn’t well received. Disney has announced in 2023, it will return the previous fireworks and projections show, Happily Ever After. We suspect Happily Ever After will return at the end of the 50th Anniversary celebration, which is March 31, 2023.

Let’s head on over to EPCOT where Walt Disney Imagineering is hard at work introducing new experiences such as the recently opened Guardians of the Galaxy: Cosmic Rewind roller coaster. 2023 should be a great year for EPCOT as Disney works on the massive four-neighborhood overhaul.

Journey of Water Inspired by Moana

“Make way, make way!” A Moana-inspired attraction is coming to EPCOT’s World Nature neighborhood. Thus far, we know Journey of Water Inspired by Moana will feature a stunning 16-foot Te Fiti. The new experience will open in “late 2023,” inviting Guests to follow the story of water on the planet, inspired by Moana’s connection to the ocean.

Another not-so-exciting 50th Anniversary celebration addition was the reveal of Harmonious, which fills the World Showcase Lagoon nightly. Disney has announced an all-new nighttime spectacular is planned for EPCOT during The Walt Disney Company’s 100th-anniversary celebration. This new show will debut “later next year.”

Figment fans are thrilled over this one! Not only will Figment continue to be the star of his own attraction, Journey Into Imagination With Figment, but Figment is returning to EPCOT for a meet-and-greet experience by the end of 2023.

Magic Kingdom may have its iconic “Partners Statue” in front of Cinderella Castle, but another Walt Disney statue is coming to the Parks! Just below EPCOT’s Spaceship Earth, Guests will be able to encounter a new Walt statue named “Walt the Dreamer” in late 2023.

When Disney unveils the “Walt the Dreamer” statue in late 2023, this will also be the next major milestone in EPCOT’s multi-year transformation as it will include the completion of the World Celebration neighborhood.

The glitz and glam of Hollywood are calling Disney fans! The ever-so-popular Disney’s Hollywood Studios is one of the most intriguing Parks as 2022 has been a quiet year. We have yet to see the return of nighttime spectaculars, including the former Star Wars: A Galactic Spectacular and Fantasmic! Thankfully, the Park’s incredible line-up of thrill rides has kept fans interested. But 2023 does bring some news!

“Fantasmic!” Should Be Back

Disney has teased the return of Fantasmic! The nighttime performance features a battle of good vs. evil with Sorcerer Mickey and friends against the Villains. Disney has announced rehearsals are underway, and we can expect it to open in 2022, meaning if you’re visiting in 2023, you can count on this show.

Get yer lasso’s ready, cowpokes, because Disney has some rootin’ tootin’ news! A new restaurant called Roundup Rodeo BBQ is currently under construction in the Toy Story Land portion of Disney’s Hollywood Studios. While the table-service restaurant will not feature a meet-and-greet option, we are still thrilled to have another dining option coming to Disney’s Hollywood Studios in 2023.

Disney has been fairly quiet about what’s to come for Disney’s Animal Kingdom in 2023. We do know change is on the way but there is much mystery behind it.

Disney KiteTails was a day-time show with large, colorful kites being flown all over Discovery River Lagoon in the DinoLand U.S.A. portion of Disney’s Animal Kingdom. The show has its beautiful moments but also featured crashing the kites. The uneasy feeling of the brutal-looking entertainment was intriguing but is saying goodbye as of September 30, 2022. Will we see a replacement in 2023? Disney has yet to comment.

During the 2022 D23 Expo, Disney announced changes are on the way to DinoLand U.S.A. Oddly enough, the news was very vague in that this land could soon feature a Zootopia or even a Moana theme. With the removal of the former Primeval Whirl roller coaster, Disney is up to something but has provided little to gather outside of us knowing change is coming.

Outside of the four Walt Disney World Parks, there are additional pieces of 2023 news to keep in mind.

We know the end of the 18-month 50th Anniversary celebration called “The World’s Most Magical Celebration” will be March 31, 2023. Disney hasn’t shared, however, if some 50th-anniversary additions, such as the Fab 50 character sculptures, will remain.

We are well aware of the refurbishment construction underway on Blizzard Beach Water Park. While Disney has not revealed when the Water Park will reopen, we suspect 2023 is the likely timeline for this Water Park to be open with its sister Water Park, Typhoon Lagoon.

Get ready to pick from over 100 selections of tequila! That’s right, an authentic Mexican restaurant called Rosa Mexicano will be opening at the Walt Disney World Swan and Dolphin in “early 2023.”

Goodbye, Ample Hills Creamery and ESPN Club. Change is on the way for Disney’s BoardWalk. The Cake Bake Shop by Gwendolyn Rogers, a new table service restaurant and bakery, is expected to open in 2023 with both savory and dessert menus, along with afternoon tea service.

Summer House on the Lake

A new restaurant is on the way at Disney Springs! Summer House on the Lake will feature a California-inspired menu with simple, sustainable ingredients, in a breezy, beach house environment. The full-service restaurant will also include an in-house bakery, as well as an extensive wine and handcrafted cocktail list. The restaurant will debut in 2023.

So far, 2023 is shaping up to be a busy year for Walt Disney World Resort! As usual, we will continue to keep Disney Tips readers are we learn more about these experiences and additional ones as Disney introduces them in 2023.