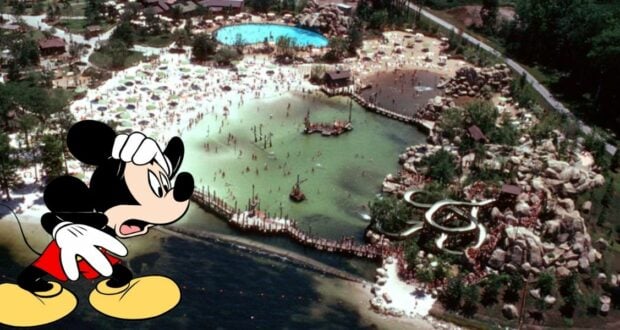 Disney World goers through the 70s, 80s, and 90s, will have distant memories of River Country; a popular Disney water park turned into a hauntingly abandoned premise. Tiktok user @theforgottenworld shared a video of a first-hand account exploring the abandoned facility.  The video shows scenes of previously popular slides and attractions vs. what they look like abandoned and overgrown.

Honestly, we have the heebie-jeebies just watching this. Take a look.

River Country was a water Park at Disney World in Orlando, Florida. Fashioned after Tom Sawyer’s swimmin’ hole, It opened on April 15, 1976 and closed on November 2, 2001 after being hit directly by a hurricane leaving many of the water slides inoperable and needing total restoration. The water park was abandoned and overgrown until an announcement at D23 in 2018.

River Country was the first water park to be built at a Disney theme Park. The idea of creating a waterpark was conceived by Disney’s vice president of design and construction, John Hench after seeing how popular the Disneyland Hotel swimming pool was. The pool area attracted families with young children Disney and Hench decided a water park could be successful at Walt Disney World Resort.

We gather that the urban explorer who took this video had previously explored and documented the abandoned grounds, prior to its demolishing which started in 2019.

The future Resort has been a slow build due to disruptions caused by the Pandemic. The Resort was due to open in 2022 but the construction has been nearly at a standstill ever since the announcement in 2018. Check out this concept art released back in 2018.

The resort is meant to embrace natural elements with a bit of a Pocahontas spin, while also featuring a Princess and The Frog-themed restaurant. There have been no recent updates on the progress of this Resort.