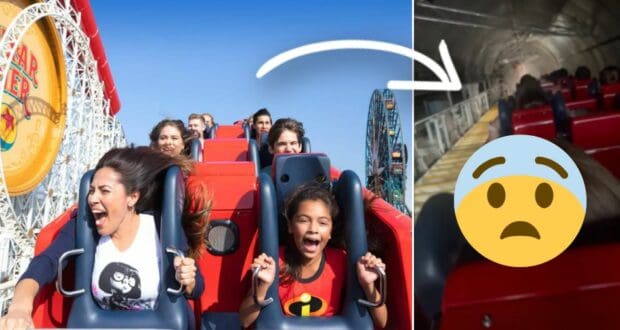 While Walt Disney World has epic roller coasters such as Expedition Everest at Disney’s Animal Kingdom and Guardians of the Galaxy: Cosmic Rewind at EPCOT, Disneyland Resort has a fan-favorite roller coaster at Disney California Adventure that is not to be overlooked.

The Icredicoaster is a fast-moving coaster that features Disney and Pixar’s film, The Incredibles (2004). Guests board the coaster to join in a mad dash to catch Jack-Jack as he wreaks havoc throughout the high-speed chase. Let’s just say it’s not for the faint of heart, with dips, upside-down loops, and turns around every corner.

RELATED: Zoom Around the Incredicoaster on a Virtual Ride at Disneyland Resort

What would make this attraction even more scary and thrilling? Well, imagine getting stuck on it! That is exactly what happened to Disney Guests in a video that was posted by @kristenpoops.

To make things more complicated, one Guest recently had surgery and needed the assistance of the fire department to be evacuated. Check out the video below:

RELATED: Disney Guests Get Evacuated Backstage After Being Hoisted From Pirates Water

The great news it the Cast Members, Guests, and Fire Department all seemed like they were in positive spirits as they handled the situation, returning the Guests to safety.

If you’ve never been on The Incredicoaster, Disney describes the experience with:

RELATED: Why Is Disney Closing Such a Popular Roller Coaster Attraction?

“The Supers Are Back: Baby Jack-Jack’s superpowers are causing chaos as he teleports from tunnel to tunnel, and The Incredibles sprint into action to save the day. Buckle up for an exhilarating ride around Pixar Pier!

This evacuation would be scary, but we’re glad everyone is safe and sound, and The Incredicoaster is back up and running.