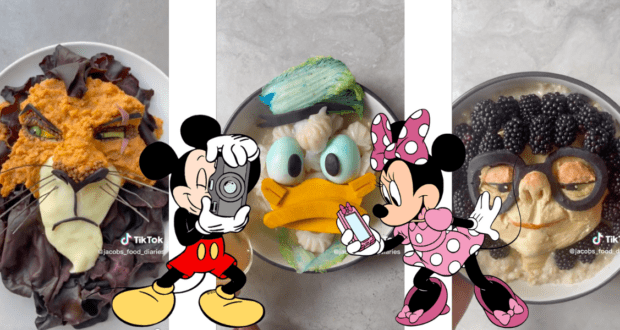 The internet is full of amazing artists, worlds of communities, and neat little videos we love to share. If you’re a Disney lover who is constantly sending videos to family and friends, then you’ve totally got to see this content creator!

TikTok user @jacobs_food_diaries posts amazing videos of their art, which is made entirely from (you guessed it) food! They recreate all sorts of characters from pop culture in their videos, but their Disney characters (such as Scar, Donald Duck, and Edna Mode) are definitely the cutest.

♬ Beauty and the Beast: Be Our Guest – Geek Music

In this video, they create Lumière from Beauty and the Beast (1991) out of what appears to be mashed potatoes, chicken nuggets, carrots, and various garnishes!

♬ Beauty and the Beast: Be Our Guest – Geek Music

When another TikTok user requests Cogsworth, @jacobs_food_diaries is quick to answer the call and create the classic character out of brie cheese, puff pastry, and other various garnishes.

Another lovable sidekick they’ve recreated is Hei Hei the rooster from Moana (2016). In this video, they’ve made Hei Hei out of the same ingredients one might find in a noodle dish.

In a similar fashion, TikTok user @jacobs_food_diaries has also made Pua, an adorable pig also from Moana, out of another noodle dish. But they don’t just make animal sidekicks or supporting characters. They’ve created a myriad of iconic Disney villains as well.

For example, this portrait of Hades from Hercules (1997) is easily one of the most creative pieces she has made! The blue noodles, the purple red cabbage, and the blue spread come together to make a pasta mosaic of the god of the underworld.

In an especially complicated challenge, the artist creates Mama Coco from Coco (2017)-wicker-wheelchair and all!

The portraits are so accurate, they look like something that could rival Walt Disney World and Disneyland Resort’s creative dishes. If you’re wondering what happens to these delicious creations after they’ve been posted, the creator has confirmed that she eats them.

Has this artist made your favorite character yet? They’ve made a ton of videos of their Disney creations, so be sure to check out their TikTok account to find out!

2023-01-03
Isabella Reimer
Previous: Film Featuring Gay Romance Scrapped By Disney Releases This Year
Next: Reasons Why you Should Participate in a runDisney Weekend