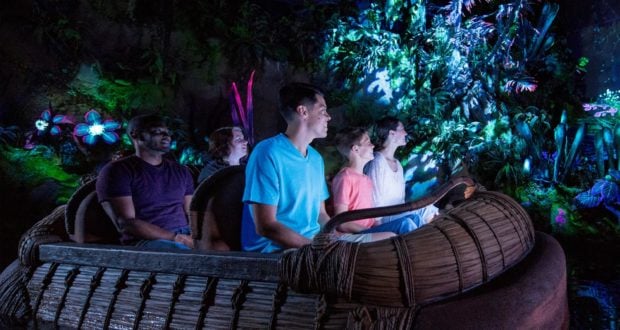 Walt Disney World Rides That Need Their Own Themed Restaurants

Creating restaurants inspired by popular attractions is not unheard of for Walt Disney World, and we love the results so far! Still, there are plenty of rides on property that we would LOVE to see turned into their themed restaurants. Here are just a few – which would you add?

For some time, there have been rumors that there was indeed a Haunted Mansion restaurant in the works – so far, these remain (sadly) unsubstantiated. But that can’t stop us from dreaming! Haunted Mansion has long been a Guest favorite, and doubtless, a Magic Kingdom Park restaurant that shares its theming would be a Guest hit!

Picture tables adorned with cobwebby candlesticks, “ghosts” waltzing by (with liberal use of the Pepper’s ghost effect used in the attraction’s ballroom scene), mysterious glowing footprints ascending the walls around you, stretching portraits, perhaps even character dining with the Hitchhiking Ghosts and Madame Leota. All against an appropriately creepy mansion backdrop and featuring yummy, fancy-turned-spooky reimagined Victorian fare, of course. Sign me up!

Satu’li Canteen is one of our favorite quick service restaurants in Walt Disney World. Still, we’d love to see a table service restaurant in Animal Kingdom’s Pandora – The World of Avatar that channels the beauty and wonder of Na’vi River Journey.

Guests could eat surrounded by the ethereal rainforests of Pandora, watching for bioluminescent evidence of the exotic flora and fauna around them while listening to the other-worldly jungle sounds and Na’vi music. It would be an interesting logistical challenge to keep a Na’vi River Journey restaurant dark enough for Guests to enjoy the magical glowing effects but bright enough to see what they were eating!

It may be too much to hope for a replica of the Shaman of Songs from the attraction since she’s the most advanced animatronic created by Disney to date – but we’d settle for some projections of Na’vi warriors. Food would, of course, build on the other-worldly, wholesome menu of Satu’li Canteen. (Yum.)

We never visit Walt Disney World’s EPCOT Theme Park without taking a ride on Soarin’. Where else can you travel the globe, experiencing the wonders of the world from the air, complete with scents that make you feel like you’re truly there?

A Soarin’-themed table service restaurant would feature globally inspired cuisine to choose their culinary adventure. A massive, IMAX-esque screen would project various aerial scenes worldwide, Soarin-style, and seating would need to be high enough that even the tallest Guest’s feet wouldn’t touch the floor while dining to preserve the illusion of hang-gliding above the planet.

The interior restaurant walls would be painted to resemble the sky, again to make sure Guests felt like they were dining high above the ground. Cue the uplifting orchestral music, and voila, a restaurant is born!

Yo ho, yo ho, a pirate’s meal for me! Chances are, if you’ve ever visited Disney’s Magic Kingdom Theme Park, you’ve ridden the classic ride Pirates of the Caribbean. We think it’s high time for the swashbuckling fun to be translated into a themed restaurant.

I’m thinking of seating in mini pirate ship replicas – Disney has pulled off restaurant seating in vintage cars and even in futuristic cargo containers, so how hard could this be, really? – Maybe accessed by walkways so that the entire restaurant floor could be submerged in water.

After all, one of the most beloved elements of Pirates of the Caribbean is that unmistakable chlorine-y, mildewy dark water smell, right? Though it may be less beloved when you’re trying to enjoy a rustic buccaneer meal while smelling it.

Disney is all about the details, and nowhere is this more apparent than in Star Wars: Galaxy’s Edge at Disney’s Hollywood Studios Theme Park. And while Oga’s Cantina and Docking Bay 7 Food and Cargo are excellent places for a quick drink or bite to eat, we’d love for Walt Disney World to take things even further with a table service restaurant in Black Spire Outpost, themed after the ever-popular Star Wars: Rise of the Resistance.

Think of the most iconic scene from Rise of the Resistance: when the transport door opens to reveal the deck of the Star Destroyer, complete with an army of Stormtroopers in front of a screen showing the vastness of space beyond. We think that would be the perfect backdrop for a Star Wars table service restaurant!

Guests could even be served by Cast Members dressed as Stormtroopers. And the menu naturally would feature Blue Milk (for better or worse!).

The Twilight Zone Tower of Terror at Disney’s Hollywood Studios gets an honorable mention because this is one of our favorite ride queues and overall themes. 1930s Hollywood glamour frozen in time in perpetual stormy Halloween gloom with a creepy dancing ghost girl and her pals hanging around? Imagine the restaurant possibilities…

It’s fun to play Imagineer every now and then and think about what changes we’d make at Walt Disney World if we were in charge. And turning our favorite rides into fabulously-themed restaurants would be top of the list! Which attractions would you love to see reimagined as restaurants?