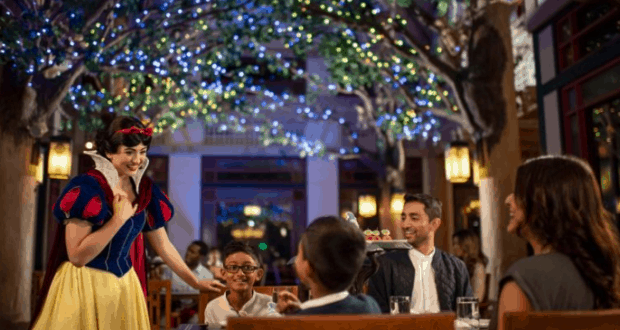 Many people who travel to Walt Disney World focus mainly on enjoying the four Disney Parks which are filled with attractions and entertainment and might just assume that they are going to be dining on stereotypical theme park food for the whole trip. While chicken nuggets, burgers, and fries certainly used to be the staple foods at theme parks around the world, Walt Disney World has continued to increase its dining offerings over the years to now present hundreds of different options ranging from international to comfort food. Full service restaurants in Walt Disney World feature a traditional style meal with a server, and many of the locations tend to book up with reservations far in advance. Advanced Dining Reservations can be made up to one hundred and eighty days ahead of time, and some full service locations are so popular that all reservations disappear on that date. Here are the ten most difficult dining reservations to get in Walt Disney World.

Disney’s Contemporary Resort is home to several full service dining locations including the very popular California Grill which is located on the top floor and offers beautiful views of the Magic Kingdom and Seven Seas Lagoon. California Grill is open nighty for dinner and features an extensive wine list and a menu that focuses on the flavors of the Pacific Coast. Those who are lucky enough to score a reservation to California Grill can enjoy options such as Oak-Fired Filet of Beef, Grilled Colorado Bison Loin, and American Red Snapper while enjoying beautiful views of the nightly fireworks. California Grill also serves brunch each Sunday which is an equally hard to get reservation as guests can enjoy delicious buffet options, plated entrees, and bottomless mimosas.

Another very popular restaurant in Walt Disney World that tends to quickly fill up can be found across Seven Seas Lagoon at Disney’s Polynesian Village Resort. ‘Ohana is located in the Great Ceremonial House and is open daily for a character breakfast with Lilo, Stitch, and friends, and nighty for a family style all you can eat dinner feast. ‘Ohana is one of the most difficult reservations to obtain thanks to its nighttime view of the Magic Kingdom fireworks as well as delicious menu items including Honey-Coriander Chicken Wings, Spicy Grilled Pell-n- Eat Shrimp, and Teriyaki Noodles.

Disney’s Wilderness Lodge is home to an amazing dining experience that combines immersive theming, favorite characters, and delicious food. Story Book Dining at Artist Point with Snow White invites guests to enter into an enchanted forest and dine on themed foods while meeting Snow White and the Seven Dwarfs. Guests who are extremely lucky enough to snag a reservation for this dining experience are sure to love the one of a kind character interactions and menu items such as Hunter’s Terrine, Brother’s Grimm Roasted Chicken, Magic Mirror Slow-Braised Pork Shank, and Bashful’s Butter-Poached Sustainable Fish.

One of the most exclusive and indulgent dining experiences in all of Walt Disney World can be found at Disney’s Grand Floridian Resort & Spa. Victoria & Albert’s welcomes guests to dine in Victorian opulence in a setting that has earned many awards and accolades throughout the years. Featuring a seven course modern menu focused on fresh and exotic ingredients, each night at Victoria & Albert’s can be different, further enticing guest s to dine there! While getting a regular reservation at the restaurant can be difficult, it is extremely difficult to reserve the Chef’s Table which is nestled with a beautiful view of the kitchen for an even more exclusive experience.

The Canada Pavilion in Epcot’s World Showcase is home to one of the park’s most popular dining locations which tends to quickly fill up with reservations very far in advance. Le Cellier Steakhouse is open each day for lunch and dinner and serves steakhouse classics infused with regional flavors from Canada. Featuring low vaulted ceilings and a cozy dining room, guests who get a reservation for the restaurant can choose from delicious menu offerings such as Canadian Cheddar Cheese Soup, Le Cellier Filet Mignon, Steamed Asian Dumplings, and Pan-Seared Red Snapper a la Paella.

The newest area in all of Walt Disney World is Galaxy’s Edge in Disney’s Hollywood Studios where guests can travel to the remote Black Spire Outpost on the planet Batuu and enter into the Star Wars universe. Oga’s Cantina is an extremely popular eatery in Galaxy’s Edge as it recreates the famous cantina from the films and serves up galactic concoctions for guests to try. With delicious drinks such as the Jedi Mind Trick, Dagobah Slug Slinger, The Outer Rim, Carbon Freeze, and Jet Juice, is it no wonder that Oga’s Cantina is so popular and reservations disappear so quickly!

No meal is as magical as one enjoyed inside of Cinderella Castle in the Magic Kingdom, and guests can dine like royalty at a very popular restaurant found there. Cinderella’s Royal Table is open each day for breakfast, lunch, and dinner and invites guests to settle into the royal banquet hall and dine on three course meals such as Seared Scallops, Tenderloin of Beef, and Peanut Butter Cake while meeting some of the most beloved Disney Princesses. With delicious food and a fairy tale setting, reservations at Cinderella’s Royal able tend to disappear very quickly.

Many guests who enjoy a Walt Disney World vacation tend to opt for at least one character meal, and one of the most popular options can be found at Disney’s Contemporary Resort. Chef Mickey’s is an open air restaurant that serves up breakfast, brunch, and dinner each day with wonderful views of the Disney Resort’s main concourse and the monorail gliding by. Guests can dine on classic buffet options including carved meats, Mickey Waffles, vegetables, pastries, and more while meeting Chef Mickey and friends including Goofy.

9. Be Our Guest Restaurant

Fantasyland in the Magic Kingdom aims to bring guests directly into some of their favorite animated films and one restaurant truly sweeps guests to the French countryside. Be Our Guest Restaurant allows guests to enter into the Beast’s castle from Beauty and the Beast and dine on French-inspired menu items in the Grand Ballroom, Portrait Gallery, or West Wing. While breakfast and lunch are considered to be quick service meals and dinner full service, reservations are accepted for all three meals and tend to go quickly. Those who are lucky enough to get a reservation to Be Our Gust restaurant can enjoy menu items including French Toast, Vegetable Quiche, French Dip Sandwich, Croque Monsieur, Spice-Dusted Lamb Chops, and Center-Cut Filet Mignon.

Another very difficult reservation to get in Walt Disney World is Akershus Royal Banquet Hall in the Norway Pavilion in Epcot’s World Showcase. Guests who dine at the location for breakfast, lunch, or dinner are invited to a feast being held by the Queen honoring some of the most beloved Disney Princesses. Breakfast at Akershus Royal Banquet Hall features family style platters of American favorites such as scrambled eggs and bacon, but lunch and dinner focus more on traditional Norwegian foods such as Tradisjonell Kjottkake, Raspeballer, and Viking Mixed Grill.