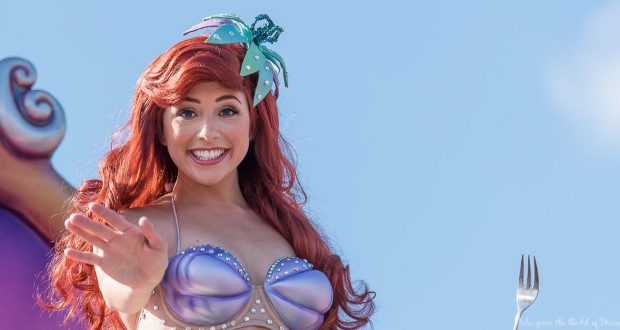 10 Things It Takes To Be A Walt Disney World Princess

It seems like a glamorous job made of childhood dreams: playing a princess at Walt Disney World. And it’s true, Disney princess jobs are highly coveted! But it’s not all fun and games, and there are aspects of being a Disney princess that are certainly less than glamorous. For anyone who’s ever wanted to be a Disney princess, here are ten things it takes. Are you up for the challenge?

Beauty and the Beast may teach us that beauty is found within, but when it comes to casting its princesses, Walt Disney World is very strict about outward beauty!  Disney princesses must look the part, and this extends to a cast member’s height and size.  Each princess has its own specific requirements for height and size, but most princess costumes only go up to a size 10.  If you’re over 5’7”, you won’t be able to play most princesses, and you’ll need to be much shorter than that to play characters like Alice and Tinkerbell.

Along with being the perfect size, Disney princesses must also have the perfect face.  Cast members must be believable as the princesses they’re playing, and because each princess is played by several different cast members at different times, their faces must not have any features that stand out or draw attention away from the character.  Any identifying facial characteristics (scars, moles, etc.) that might be noticed by guests are not allowed.  However, the makeup supplied for WDW characters is pretty amazing, and it can cover up minor skin imperfections – so to an extent, Disney princesses can be perfectly imperfect when it comes to their complexions.

8. Willingness to Play Any Character

Even successful Disney princesses don’t have control over who they play.  You might look exactly like Belle, but if WDW doesn’t need more Belles at the moment, you’re out of luck.  Besides, no matter what princess you’re hired to play, all character cast members start out playing “fur” characters (costumes where the face isn’t seen – think Mickey, Winnie the Pooh, and the Beast, among others).  So, even Disney princesses have to pay their dues!

Not surprisingly, all Disney princesses must successfully audition to become cast members.  What is surprising, though, is how gruelling these auditions are.  To start with, they can last up to 6 hours, and can be absolutely brutal.  Potential princesses are cut if they don’t fit height and size requirements, or simply for not looking like a princess.  And even if you do look the part, you have you pass smile tests, improvisation exercises as different characters, dance movement tests, cold reads as different Disney characters, and even character tests in full costume and makeup!  You definitely have to be tough to pass the Disney princess audition process.

Once a Disney princess has made it through the audition process, she’s still not out of the woods.  Because that’s when the real work begins: training.  A cast member must scour Disney movies to learn their character’s specific mannerisms, vocal traits, and any spoken lines they’re known for, as well as everything about a character’s Disney world, including their relationships with other characters.  There’s even autograph training (no, we’re not kidding) so new cast members can learn to emulate the established signature for a given princess.

In addition to knowing everything about their specific princess’s world, cast members playing Disney princesses must excel at improvisation, so they won’t be caught off guard, no matter what a guest asks.  And kids can ask a lot of questions!  Disney princesses have to have answers ready that fit within their character’s universe.  After all, if you’re playing Cinderella, and you can’t tell a child where your prince is at the moment, or you don’t know if you’re wearing your glass slippers today, you’re not going to last long as a Disney princess!

It’s not easy playing a Disney princess.  The weather in Florida can be extremely hot and humid, and Disney princesses must often work outside in extreme temperatures in uncomfortable or heavy costumes, while keeping smiles on their faces and remaining in character.  Or they might have a lighter costume like Pocahontas or Tinkerbell, and have to work outside in cold weather.  Disney princesses spend hours on their feet, and talking to guests for hours every day while in “princess mode” can be exhausting!

You just never know what happen when you’re a Disney princess.  We’ve read stories of former Disney princesses being hit on by dads, and of course not all children a princess meets will be on their best behavior.  Cast members in pre-princess fur costumes have been punched by kids while their parents cheered them on, or asked inappropriate questions by adults.  Whether it’s smiling in the face of temper tantrums or gracefully dealing with requests for phone numbers, Disney princesses have to be able to handle just about anything!

When you’re a Disney princess, it doesn’t matter if you’ve had the best work day ever, or the worst – you have to keep it to yourself.  Walt Disney World doesn’t permit princesses to talk about any details of their jobs on social media, including which character they play.  Even when in character, Disney princesses can’t talk about anything outside of their character’s specific sphere of existence – they have to pretend to be ignorant about anything their character wouldn’t know about.  So don’t try to talk about the internet or your favorite superhero to Snow White, because she will play dumb!

If there’s one thing common to all Disney princesses, it’s the princess smile!  Disney princesses must always be smiling and pleasant, which isn’t easy considering they’re played by real people with real lives, who may not feel like smiling for various reasons.  Cast members playing princesses must be able to put their personal problems aside to stay in character and smile continuously for guests.  If they’re noticeably less cheerful than usual, they’ll be switched to other duties that day, that don’t involve close interaction with guests.  New Disney princesses often find their faces actually hurt after a long day of wearing a perma-smile!