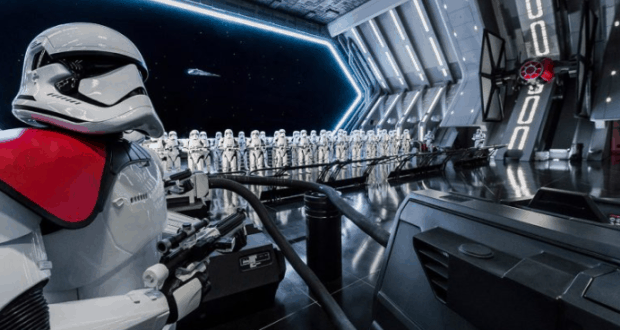 10 Things to Know About Star Wars: Rise of the Resistance at Walt Disney World

When Star Wars: Galaxy’s Edge opened at Hollywood Studios at Walt Disney World in August 2019, it did so with a few shops, restaurants, one attraction—Millennium Falcon: Smugglers’ Run—and the promise of another attraction—Star Wars: Rise of the Resistance—in December of the same year. The brand-new 14-acre park—that cost more than $1 billion to construct, by the way—is set inside Black Spire Outpost on the remote planet of Batuu and welcomes Guests to visit, have something to eat, shop, explore the land, pilot the Millennium Falcon and even join the Resistance in battle against the First Order. Want to join the Resistance? Here are 10 things you’ll want to know about this amazingly unique, state-of-the-art experience.

10. The only way to join the Resistance is via the My Disney Experience app.

If you want to experience the Rise of the Resistance attraction, you’ll need to make it into a boarding group, and the only way to do so is to request to join the virtual queue for the ride in the My Disney Experience app.

If you’re lucky enough to get into a boarding group, you’ll have a group number and you’ll want to keep your app handy. When it is time to experience Star Wars: Rise of the Resistance, you’ll get an update in the app that tells you to head to Batuu and show your virtual boarding pass (barcode) or scan your MagicBand for entry. And that’s when the adventure begins. . .

If the Force is with you and you’re able to get into a boarding group for that day, it’s important to know that there’s still a chance you won’t actually experience the attraction. If you and your party are in a late boarding group, or an alternate boarding group, ride operators might not get to your boarding group number before park close. This can be especially true on days when Hollywood Studios is at capacity or during the phased reopening of the park, during which operating hours are much shorter.

Thanks to interworking ride systems, the Rise of the Resistance attraction is four times the amazement. The ride combines the best things about a trackless dark ride, a walk-through, a drop ride and a motion simulator. The four work together seamlessly to offer Guests an experience unlike any other in the parks.

7. Props are just the beginning.

In addition to different ride systems, Star Wars: Rise of the Resistance also boasts a complexity in the design and construction of the experience. The ride makes use of uncharacteristically life-like audio animatronics, projection mapping, elaborate sets and screen-based media. All four work together so congruently that you’ll feel like you’re right there in the middle of the action. (And those AT-ATs are just about life-size!)

“Is this a ride or is this real?” You’ll wonder the same thing when you first arrive to be “interrogated” by members of the First Order (Cast Members donning First Order uniforms who speak to Guests with a flat affect and give orders to them about where to stand, where to walk and what to do.) Bonus points if you can figure out how many of those Stormtroopers are real people and how many are fixtures inside the ride.)

5. Kylo Ren and General Hux are not happy.

Guests first see the devilish duo on the ship’s bridge after arriving in an escape pod from Batuu. They have given orders for all Guests to be interrogated, but lucky for them, in the next room, Guest board ride vehicles (First Order fleet transports) in which they are seated for the remainder of the experience.

We mentioned above that Star Wars: Rise of the Resistance is a culmination of a few different ride systems. When Guests first board the First Order fleet transports, they are seated and instructed to fasten their seatbelts, which may strike some as strange since the first part of the experience involves a trackless ride system similar to the one Guests experience at Mickey and Minnie’s Runaway Railway. The ride vehicles move through different corridors before “whooshing” Guests straight into the air vertically, nearly eye-to-eye with the life-size AT-ATs in the ride. (Now we’re glad to have our seatbelts fastened!) The trackless part of the ride continues before each ride vehicle moves into a small room and is “locked” into the floor. Then the motion simulation begins as we battle it out in the cosmos with the First Order. Then hold on for the drop that takes the ride vehicles back to ground level, where the experience is trackless once again just before the ride is over.

Although Star Wars characters inside the attraction are audio-animatronics, many of the actors that fans love from the Star Wars saga reprised their roles in the attraction, providing voices for the animatronics and acting in scenes filmed for the attraction. Oscar Isaac, John Boyega, Daisy Ridley, Adam Driver and Donhall Gleeson played the roles of the characters they play in the saga. And CGI sequences throughout the experience were created by Industrial Light & Magic.

Star Wars: Rise of the Resistance is an attraction unlike anything ever created in theme park history. If you haven’t experienced it yet, we won’t spoil it for you, but let’s just say the experience is not only lengthy, but it’s also completely immersive, beyond technologically-advanced, and the most amazing attraction to ever come into the minds of Disney’s Imagineers. (And I’m not even a Star Wars fanatic!)