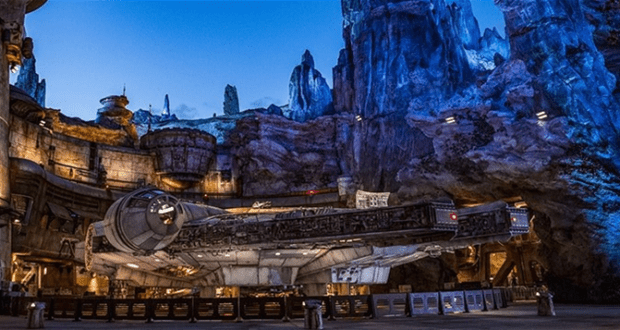 Chewie, we’re home! This might be what every Star Wars fan thinks when strolling through Star Wars: Galaxy’s Edge in Disney’s Hollywood Studios. Covering 14 acres of the park, this exotic land is designed to delight Star Wars fans’ senses though the attractions, signs, shops, restaurants, and the inhabitants that make up the cosmic atmosphere. Imagineers created thousands of clever details throughout this galactic land; some are very easy to spot, while others might only be obvious to the more expert Star Wars aficionado. Check out my favorite hidden gems the next time you find yourself wandering through the mysterious paths of Star Wars: Galaxy’s Edge.

If you find yourself thirsty during a visit to the Black Spire Outpost, keep an eye out for the tentacled Dianoga that lurks in the water fountain located here. You might remember him from the trash compactor scene in the Death Star in “Star Wars-A New Hope.”

Oga’s Cantina is the place to be for refreshments and light snacks while visiting Galaxy’s Edge. Enjoy a T-16 Skyhopper or a Bespin Fizz and some Batuu Bits, and keep an eye out for the frog-like woort creature, a native of Tatooine, that prowls inside of an aquarium at the bar. Don’t worry, the woort eggs in the tank aren’t used as a garnish for patron’s drinks!

Guests visiting Galaxy’s Edge are busy checking out the signs, buildings, and vehicles, but take a few moments and look down. The pathways are imprinted with evidence of the inhabitants of this strange town. Check out the tracks left by animals and droids, including the famous R2-D2.

Let your ears take over as you enter the Resistance Forest, which is the main tunnel entry to Star Wars: Galaxy’s Edge, past MuppetVision 3D. You might think this is a Jedi mind trick, but you can hear mysterious animal rustlings, bird calls, and droid noises.  You might even hear resistance fighters conducting repairs.

Everyone loves the cute bird-like porgs that live on Luke Skywalker’s island. Fans were introduced to these creatures during “Star Wars: The Last Jedi”. As you walk through the queue and crew room of the Millennium Falcon-Smuggler’s Run attraction, check out the porg nests made out of old wire and other items.

Walk through the winding pathways of Galaxy’s Edge, and you’ll soon start to notice one very big detail: all of the signs for the restaurants and shops are printed in Aurebesh! If you don’t speak Aurebesh, the Play Disney Parks app will allow you to scan the foreign words and translate them into English.

One of the first clues that signal you’re on a strange planet are the otherworldly animals lurking on the shelves of shops, hiding in corners, and even walking around the area, like the furry Wookie! Duck into the Creature Stall in the Marketplace, and you’ll find a wild assortment of critters, like Felucian fireflies, rathtars, porgs, wampas, and dewbacks, that can be “adopted.” Listen closely, and you might hear the Kowakian money lizards and a lothcat scurrying around and creating havoc above the shop.

Docking Bay 7 Food and Cargo is a great place to grab a delicious quick-service meal. Before you head into the restaurant, see if you can spot the shipping crates on the roof. One bears the number 77 and the other has the number 83. The crate lowered inside the restaurant has the number 80 marked on it. Get a better look at these from the upper queue area as you wait to board the Millennium Falcon: Smugglers Run. If you haven’t guessed it yet, these numbers pay homage to the films “Star Wars: A New Hope”, released in 1977, “The Empire Strikes Back”, opening in 1980, and “Return of the Jedi”, released in 1983.