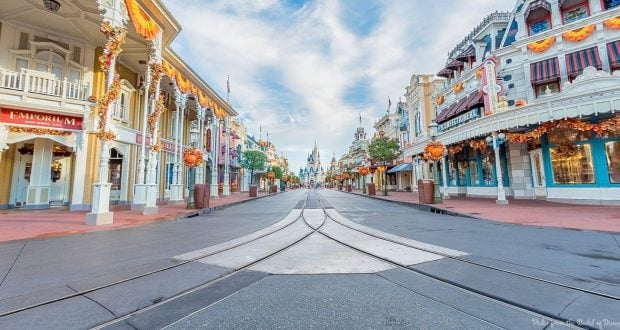 Of the four theme parks in Walt Disney World, the Magic Kingdom is by far a fan favorite. Filled with six distinct lands brimming with attractions, live experiences, and stunning details, the park has enough to see and do to keep guests coming back time and time again. Park of what makes the Magic Kingdom so amazing are the details located everywhere throughout the park that transport guests to exotic lands, space, and even the Wild West. Some of these details are very subtle and almost impossible to spot and some are hidden in plain sight for guests to find and enjoy. Part of the fun of a Walt Disney World vacation is spotting hidden details that add depth to each area of the Magic Kingdom including Main Street. Here are seven hidden secrets in Main Street in Walt Disney World.

Each building on Main Street is either two or three stories tall and features lots of amazing architectural details to make guests feel as though they are really at the turn of the century. The windows of each building also have descriptions advertising local townsfolk and businesses. While these advertisements might seem real, they actually each pay homage to an individual who was instrumental in the building of both the Magic Kingdom and Walt Disney World. Furthermore, each window also pays tribute to a certain aspect of that individual’s personality through the type of business they are advertising. Some notable names which can be found along the Main Street windows are Walt Disney, Roy O. Disney, Yale Gracey, Card Walker, and Frank Wells. Two examples of how personalities were honored are Walt Disney’s window above the Walt Disney World Railroad Station giving him the title Chief Engineer since he was a lover of trains and Frank Wells’ window which is the only one on the third floor of a building as he was an avid climber and mountaineer.

The largest store on Main Street is the Emporium which spans almost the entire left hand side of the street. Guests can enjoy large window displays outside featuring Disney characters and shop for everything from plush dolls and costumes to toys and houseware. Throughout the Emporium there are tons of amazing details which help to support its role as the general store of Main Street, and one detail can be found several times on signage and in small details. On the main sign for the Emporium guests can spot a detail saying that the store opened in 1901 and the number can be found in several other spots inside the many rooms of the store. While 1901 might seem like a random number, it is actually paying homage to the year Walt Disney was born.

A great detail which adds a backstory to the residents and social life of Main Street can be found in both the Emporium and the Chapeau. Located inside both stores are old fashioned wall mounted telephones with ear pieces that can be removed and listened to. While the telephones might just look like props, guests who pick up the receivers will hear actual conversations of Main Street residents as well as some gossip! Party lines were popular at the turn of the century and they were shared telephones used in apartment buildings. The telephones on Main Street are no different and allow guests to have a taste of the social goings on in the town.

One of the most popular restaurants in the Magic Kingdom can be found on Main Street just past the Walt Disney World Railroad Station in Town Square. Tony’s Town Square Restaurant is a full service dining location open for lunch and dinner that is based on the classic restaurant in Lady and the Tramp where the two dogs shared their first spaghetti kiss. Each meal there serves up traditional Italian cuisine with a classic décor. Throughout the restaurant there are several details which pay tribute to the animated film that inspired the location including a stain glass window which shows the two dogs kissing in the alleyway. One detail that can been seen without a reservation from outside the restaurant is a set of paw prints in the concrete declaring the love between Lady and Tramp.

Located in Town Square on the left hand side of Main Street is the Fire Station which now serves as a sign up location for the interactive game Sorcerer’s of the Magic Kingdom. Guests who look closely at the sign for the building will realize that it is Station number 71, which might seem random but pays tribute to the Magic Kingdom’s opening year of 1971.

Each afternoon at five o’clock a special flag lowering ceremony happens at the flag pole in Town Square on Main Street. Disney security leads a patriotic ceremony where the flag is lowered and folded to be brought in for the night as per American tradition. Sharp eyed guests might realize that in addition to the American flag on the pole, there are several others waving on the roofs of buildings along Main Street. Those flags are not brought in for the night as they are not real American flags. On each of those flags there is a subtle but intentional mistake so that they are not considered actual American flags and do not have to be lowered and folded each evening.

Guests who walk towards Cinderella Castle down Main Street will notice a small side street which branches off to the right called Center Street. There is a small seating area for guests to enjoy located near windows advertising dance lessons and singing lessons. One quiet days, guests who are enjoying the atmosphere on Center Street can hear the sounds of tap dancing and musical lessons drifting down from above! This great hidden secret and many other details help to make Main Street such an amazing place!