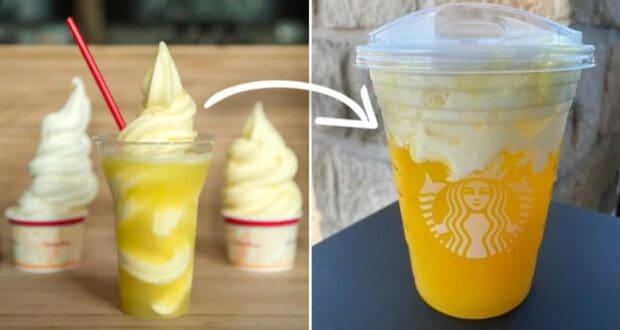 The Secret Way to Get a Dole Whip Drink at Starbucks

If there is one Disney snack that it seems like we all simply can’t get enough of, it’s the classic Dole Whip treat. But, what if you aren’t able to get to the Disney Parks to enjoy one? No worries! Here’s a secret way to get that Dole Whip flavor right at your local Starbucks.

Dole Whips have exploded in popularity for all the right, delicious ice cream reasons! This chilling treat is perfect for Central Florida weather. Just recently, Disney opened a new Dole Whip shop called “Swirls on the Water” at Disney Springs.

Not only does Swirls on the Water have Dole Whip Nachos and Dole Whip Flights with multiple flavors, but you can also get special red wine and Dole Whip combinations!

Now, thanks to TotallyTheBomb, we have the perfect “Starbucks Secret Menu” recipe for ordering a Pineapple Starbucks Dole Whip drink off the secret menu right in your hometown. Recently, a new Starbucks refresher was released called the Paradise Drink Refresher. With a few modifications, it can actually taste like that coveted Disney Dole Whip in a cup!

So, how exactly does one order this Dole Whip drink? When arriving at Starbucks start by ordering a Grande Paradise Drink Refresher. Ask for sweet cream cold foam on top. To get that Dole Whip consistency, ask for this to be blended along with 1 scoop of vanilla bean powder. And let the taste buds rejoice!

Keep in mind, that you can’t just approach your local Starbucks and ask for a Pineapple Dole Whip drink. The barista will likely look rather confused! Instead, order following the instructions below to have the Disney-inspired Dole Whip drink.

Want to try a few other Dole Whip copycats? Outside of this Dole Whip at Starbucks, check out these delicious Dole Whip Margaritas and Dole Whip Mimosas. Happy sipping, Disney fans!