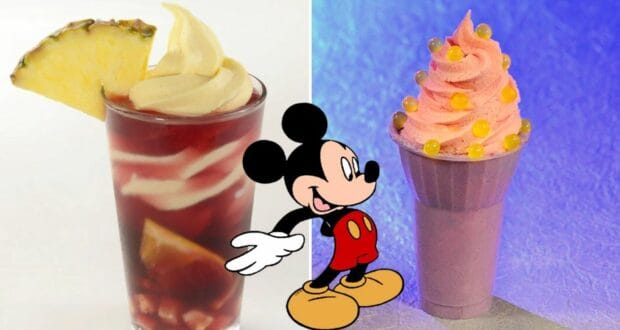 Calling all Dole Whip (and wine) lovers! Walt Disney World Resort has a new Disney Springs location that is dishing out Dole Whips in a new way. As if a regular Dole Whip isn’t delicious enough, Disney is colliding red wine and Dole Whip for a unique Disney treat we can’t get enough of.

Disney Springs, the massive dining, entertainment, and shopping district, welcomes Disney fans from around the globe with its free admission and enticing experiences. Recently, Disney opened a new location called Swirls on the Water in the former AristoCrepes location in the Marketplace portion of Disney Springs.

Most recently, Disney is offering Dole Whips at this location in a new way with unique flavors and social media-worthy foodie photos. Dole Whip cool floats, “soft-surfed” cups and Dole Whip dessert nachos are just the beginning! Guests can even try a Dole Whip flight, which features a trio of delicious flavors to savor.

Currently, Disney Springs is celebrating the debut of the Disney Pixar Lightyear (2022) film with a Buzz Lightyear Star Commander Cone, which includes a purple cheesecake soft-serve adorned with chocolate wings and space sprinkles. This intergalactic treat is available at Swirls on the Water through the end of June.

BUT – the show stopper for us is the new Dole Whip Float featuring Rosa Regale Sparkling Red Wine, DOLE Whip strawberry, and a fresh strawberry slice. Red wine and a Dole Whip? It doesn’t get much better than that! Check out the enticing photo of the new Dole Whip below:

RELATED: How to Make Dole Whip Mimosas Right at Home

Disney has noted this yummy creation is available for $11.99 through the month of June at Disney Springs. Can’t make it for June? No worries! Swirls on the Water also offers a Sangria Float with DOLE Whip Pineapple served over Red Wine Sangria on its regular menu for $10.99 as pictured below:

If you want to try the new Dole Whip Float featuring Rosa Regale Sparkling Red Wine, be sure to drop by Swirls on the Water at Disney Springs soon. Cheers!