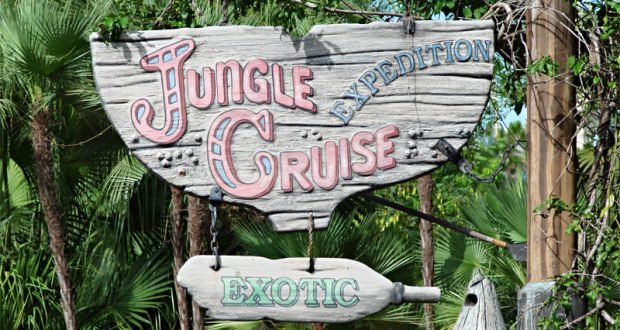 8 Facts and Secrets About the Jungle Cruise

Deep in the lush jungles and mysterious paths of Adventureland, the Jungle Cruise awaits daring and brave travelers with a sense of humor. Opening in 1971, where else can guests float down the Amazon, Congo, Nile, and Mekong rivers in ten minutes, come across fierce natives, and encounter exotic wildlife, but the Magic Kingdom’s Jungle Cruise? Your skipper steers your boat, keeps passengers entertained, and narrates the expedition, making this easily one of the Magic Kingdom’s most loved attractions. While the jokes are corny and the animals aren’t real, there are plenty of facts and secrets about this attraction that make it a timeless classic.

The 27-foot long vessels that take you on your journey were inspired by the film, “The African Queen”, with Humphrey Bogart and Katherine Hepburn.

Walt Disney originally intended that the Jungle Cruise would include live exotic animals, but experts warned him that live animals wouldn’t always cooperate for guests’ viewing pleasure. Attractions with live animals wouldn’t materialize until 1998 with the opening of Disney’s Animal Kingdom.

The Imagineers selected very specific plants that looked tropical, but were hardy enough to thrive in Florida winter weather that wasn’t quite as warm as in the real tropics.

The queue for this attraction is filled with wonderful details that one would expect to need for a jungle expedition. Mysterious crates, old maps, lanterns, and silly signs give guests plenty to look at to pass the time in line. Watch out for the hairy tarantula that sits in a cage on the right-hand side of the loading dock. Wiggle your hand in front of it, and it might try to convince you that this animal is a real one.

As you are waiting at the loading dock, look directly across the waterway at the small hut with the straw roof, which is possibly a home for one of the jungle skippers. Surprisingly, the straw roof isn’t real either, but made of metal strips.  Real straw wouldn’t stand up to the heat, humidity, and rain so common in Florida.

Once you are off on your river cruise and floating down the Congo, there is half of a crashed Lockheed plane sitting off in the jungle. The other half of this plane can be seen in the Great Movie Ride in Disney’s Hollywood Studios as part of the Casablanca scene.

If you’re visiting the Magic Kingdom during the Christmas season, the Jungle Cruise is transformed into the Jingle Cruise. As the story goes, the boat skippers are homesick around the holidays, so they added some holiday cheer to the jungle. Look for vintage seasonal decorations and signs around the queue area, a holiday radio music broadcast in the background, boats renamed with a holiday theme, and new jokes during your cruise.

In my opinion, most of the Hidden Mickeys on the Jungle Cruise are hard to spot. One of my favorites is in the scene in which the explorers are climbing the pole to escape the rhinoceros. There are three gray rocks on the ground at the base of the pole which form a Hidden Mickey.

2016-06-24
Melissa Fegely
Previous: 7 Facts And Secrets About Pirates Of The Caribbean At Walt Disney World
Next: Disney Rides You Might Be Able To Ride Over And Over With Short Lines