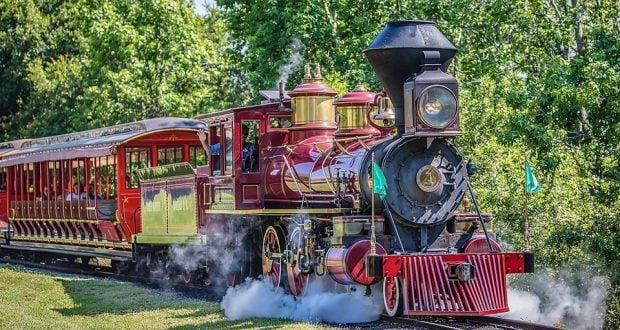 All Aboard! There is something about the sound of the steam whistle cheerfully announcing its presence all over the Magic Kingdom that puts a smile on my face every time I step foot inside this park. The soothing clickity-clack on the tracks is music to my ears as my family makes a train ride a must-do on every visit to the Magic Kingdom. Whether you take advantage of the Walt Disney World Railroad to save your feet a few extra steps or you enjoy the scenic loop around the park, there are really so many wonderful reasons to take a ride. Here’s why ridin’ the rails should be part of your next visit to the Magic Kingdom!

Walt Disney loved trains and he constructed a miniature train in the backyard of his home. Named the Carolwood Pacific Railroad, this steam-powered locomotive went around the perimeter of his property, giving rides to his delighted children and their friends, as well as celebrities. He went one step further and created the Santa Fe & Disneyland Railroad in Disneyland in 1955.

The building windows on Main Street USA honor the talented people that created the Magic Kingdom. Check out the window on the front of the train station before you enter. Walt Disney is listed here as Chief Engineer, Walt Disney World Railroad Office, Keeping Dreams on Track. It’s the only window guests can see from the front of the park.

Every Disney park in the world has a version of the railroad, ensuring that guests everywhere can enjoy Walt’s passion for trains. The Walt Disney World railroad is one of the busiest steam-powered railroads in the world, carrying over 3.7 million passengers each year.

Take a ride on the Walt Disney World railroad anytime! Trains arrive at each station throughout the park every 4 to 10 minutes, so there’s never a long wait for the next train.

Train stations are located in Frontierland, Fantasyland, and on Main Street USA, so guests can hop on and off as you make your way to another part of the park. It’s a great way to give your feet a much-needed break.

Hop on the Walt Disney World Railroad at the Main Street USA station, and catch a great view of the front of the park. Guests are soon off through the lush and shady foliage of Adventureland. Next, your trip journeys through Frontierland with views of Splash Mountain and Big Thunder Mountain Railroad. You’ll pass by scenes of Native Americans and wildlife along the way, and soon you’re pulling up to the Fantasyland station. The next leg of the trip chugs past scenic views of Tomorrowland and the Contemporary Resort, and soon you’re back to the front of the park. The entire trip takes around 20 minutes and covers 1.5 miles, so it’s great chance to sit back, relax, catch the breeze, and enjoy the view from the open-air train cars.

Four locomotives make up the Walt Disney World Railroad. The Lilly Belle is named after Walt’s wife, Lillian and was built in 1928, sharing this distinctive year with Mickey and Minnie Mouse. The Roy O. Disney pays homage to Walt’s brother. The Roger E. Broggie gets its name from the Imagineer who was in charge of the creation of the railroad at Walt Disney World. Finally, the Walter E. Disney is named after the legend himself. All built between 1916 and 1928, the locomotives were rescued from the Yucatan Peninsula in Mexico and shipped to the Tampa Shipbuilding and Dry Dock Company to be restored.

Don’t rush by the Main Street Station without admiring the station itself. Look around and be transported back to a train depot at the turn of the century, complete with brass chandeliers with gas fixtures. Wooden benches and large picture windows invite travelers to rest while waiting for the next train to arrive. I love the signs downstairs announcing departing and arriving trains, the photos of Walt Disney, and the old-fashioned arcade games. Don’t miss the collection of passenger luggage on the shelf, playfully themed for each land in the Magic Kingdom.